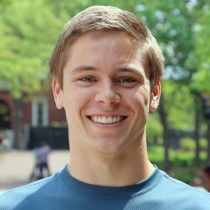 What’s your next adventure?

Immediately after graduation I am going to [naval] officer candidate school in Rhode Island. After 12 weeks there I’ll go to flight school in Pennsacola where I’ll learn the basics of being a Navy pilot like instrumentation, military combat, surveillance. That’s about a year. After that, I have to qualify for advanced training, probably in Corpus Christi, Texas. That’s where I will be assigned to jets, helicopters, or big wing. Each has its own perks, but I’m hoping to be assigned to jet training – the most demanding and most dangerous of the three, because my dream is to fly an F-18 Super Hornet.

I did an internship as a manufacturing engineer at Northrop Grumman in Saint Augustine, Florida. I also did four rotations with Gulfstream – in human factors engineering, systems test design, performance engineering, and flight test engineering. The flight test engineering rotation sealed the deal. That’s where I met dozens of Naval and Air Force guys – the crème de la crème of pilots – and I was able to pick their brains about becoming an experimental test pilot, my dream. Their passion and all around knowledge of the field floored me. They were committed to safety, but they also had a practical view about the overall operation. Instead of working every mission out to 12 decimal spaces, they were thinking about how to complete the mission.

I chased down a lot of ‘no’s’ before I got to this ‘yes.’ I loved learning straight engineering and it’s given me a great foundation. Now I’m ready to embark on one of the greatest challenges in naval aviation: learning how to land on a ship in the middle of the ocean. The challenge is great, but the camaraderie is greater. I’ll be a part of the U.S. Navy, working together to protect democracy and justice around the world. There couldn’t be anything more fulfilling than that. And, intellectually, I’ll have to be ready for constant change and constant challenges. Every year, I’ll be in a different place, working on different problems.

How did your educational experience at Georgia Tech help you to achieve your goal?

The default route would have been to become an engineer after I graduated. No one in my family is in the military and the training itinerary in front of me is long and difficult. But Georgia Tech is full of leaders in different fields who have broken away from the default route. I listened to that. The only rule they followed is work hard and be certain about your dreams. I learned how to work hard in the aerospace engineering program. I learned how to solve difficult problems, how to handle immense amount of stress, how to carry a heavy load and still do well. The engineering knowledge I gained will be a big help throughout my naval aviation training. The perspective I gained through co-ops confirmed the rest.

Try everything. Get involved in things you think you might like – even if it’s just for a semester. You’ll learn more about who you are and what you like. There may not be another time in your life when you’ll be able to get outside your comfort zone to try something different. And, intellectually, no school is going to push you more than Tech.  You’ll be challenged to give it your best. For me, all of these things helped me to see that I had to follow my heart, that I had to go into the Navy. I would not change a thing, because I feel entirely prepared to be a success in the Navy.