Holzinger’s proposal, “Dynamic Data Driven Electro-Optical Sensor Detection, Tracking, and Multi-Objective Control”  was one of 58 chosen to receive the award, which is given annually to outstanding scientists and engineers at research institutions who have received their PhDs in the last five years. Two other Georgia Tech researchers  were also chosen from the field of 230 applications: Dr. Hadi Esmaeilzadeh for “Accelerated System Design for Perception and Control in Energy-Constrained UAVs” and Dr. Dr. Matthew McDowell for “Reaction-Induced Sintering for Fabrication of Bulk Nanoporous and Composite Metals”

Holzinger’s work centers on improving electro-optical sensors that can identify and track objects in a number of environments, including space, aircraft, and maritime domains.

“If we can improve sensors to intelligently collect data in real-time and adjust the algorithms that process information, we will have a better grasp of what is up there,” says Holzinger. “The idea is to increase our domain awareness so we can reduce the loss or degradation of assets – in space, the ocean, anywhere.”

Holzinger points out that current systems used for tracking, and classification of aircraft (i.e. commercial, UAVs, military) and space objects (i.e. debris, satellites, launch vehicles), do not dynamically select and improve upon models in real-time. A lot of relevant data is not captured real-time, critical observations are missed, and follow-up opportunities are squandered. This can result in inefficient asset utilization or loss of space assets.

The YIP-funded project dovetails with Holzinger’s work with other hardware systems, including the RECONSO cubesat mission that is scheduled for launch in 2018, and the OmniSSA project, which will deploy relatively low-cost commercial off-the-shelf technology to improve our assessment of space objects and debris.

“I’m honored to have been chosen for this award because it will also give me a chance to impact a lot of substantive, related areas,” Holzinger said. “It will boost my efforts in all areas.” 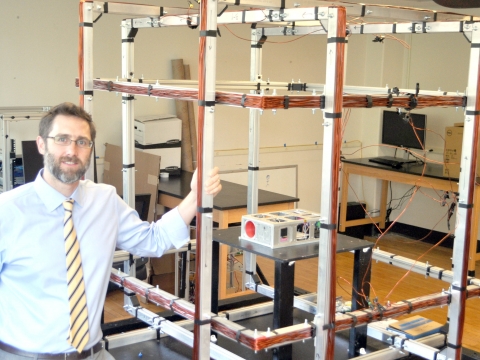