Cameron McMillan, a fourth year aerospace engineering student, has been chosen by the Astronaut Scholarship Foundation to receive a $10,000 scholarship.

Announcement of the prestigious award came from none other than Georgia Tech alumna and three-mission astronaut Dr. Jan Davis, BS '75.

"The criteria for this award is that only the best and brightest students pursuing science, technology, engineering or math degrees are considered," said Davis.

"Recipients of this award must have demonstrated dedication to research, and to being well-rounded members of their community."

But he wasn't alone at the November 15 awards ceremony, held in Georgia Tech's Student Success Center. Three other former AFS recipients (all current Georgia Tech grad students) were cheering him on from their seats in the audience:

Ultimately, McMillan hopes to enter the private sector as a researcher -- after earning a master's degree in advanced vehicle design and optimization. Right now, however, he is immersed in three different research projects.

As a member of the NASA Model-Based Systems Engineering (MBSE) project in the ASDL, he is researching an engine certification protocol for a commercial carrier that is increasingly partnering with NASA.

"If this carrier is going to work with NASA, they need to make sure their engine specs will meet NASA's standards."

McMillan is also working with Prof. Brian German on designing an electric engine to meet the growing demand for thin haul air transport. 'Thin haul' markets are defined as relatively short air traffic routes that have sporadic demand but which could, if taken together, create a significant pressure on the system.

And, finally, McMillan is working with ASDL research engineer Dr. Daniel Cooksey on developing a robust and portable UAV for the military's Special Forces Command.

"With good vertical take off and forward flight capabilities, it could really help ground forces," he said. "You can use it to carry medical equipment or ammunition to remote locations."

Davis was one of only 200 women at Georgia Tech when she came here as a freshman in the early 70s. Sometimes that made for some awkward situations, she recalled, but it never made her question her passion for science and engineering.

"People have asked me: 'When you were a little girl did you play with dolls or did you play with rockets? How did you get to be an astronaut?' I played with dolls, but I always wanted to find out how things worked. My mother says I took apart a doorknob when I was three years old just to see how it worked."

Davis's career gave her plenty of opportunities to satisfy that longing. She flew as a mission specialist on both the Endeavor (1992) and the Shuttle–Mir (1994) missions and served as the payload commander on STS-85 Discovery mission (1997).

But it wasn't all a straight shot. Davis had already earned two degrees when she made her first two bids for astronaut training. She was rejected both times. Davis was just finishing her doctoral program when her third application went through. The sting of the rejections was quick to fade.

"People have two reactions when you set a big goal like becoming an astronaut," she said.

"Some will say, "'Great, we're pulling for you.' Others will say 'You're crazy. That's like trying to win the lottery.' I say 'Don't worry about having goals that are too lofty. That's what you should have. I encourage you to set lofty goals that make you work hard."

Yep. Sounds like a Georgia Tech grad to us. 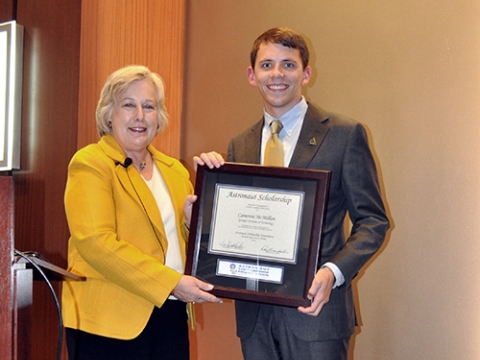