Donald W. Richardson, B.S. AE '51 has been named an Honorary Fellow of the Royal Aeronautical Society (RAeS) of the United Kingdom. The longtime chair of AE's Aerospace Engineering School Advisory Council (AESAC) received the award December 6, during a black-tie ceremony held a the London RAeS headquarters.

"It is not surprising that our British colleagues honored Dr. Richardson," said Daniel Guggenheim School Chair Vigor Yang. "In addition to enriching our legacy at Georgia Tech, Don has contributed generously to the aerospace industry over the course of his career - including the development of area navigation, a concept that was implemented world-wide as the air traffic control standard. His technical expertise continues to influence aerospace engineers just entering the profession today."

With this latest honor, Richardson joins many well-known aerospace icons - including Wilbur and Orville Wright, Donald Douglas, Igor Sikorsky, Winston Churchill and Alan Mulally - all of whom were recognized as Honorary Fellows by the Royal Society.

The Society’s Awards Program annually celebrates individuals and teams who have made an exceptional contribution to aerospace, whether it is for an outstanding contribution or achievement, a major technical innovation, exceptional leadership, long and valued service, or for work that will further advance aerospace. This year, four individuals received the Honorary Fellow award. Richardson was the sole American.

Donrich Research, Inc., a firm that handles technical aerospace issues, business strategy, and conflict resolution. Over the past 60+ years, he has devoted his career to research and innovation in human factors, aircraft design, and air traffic control. Richardson holds three patents for aircraft cockpit display systems and is a licensed commercial pilot with instrument, multi-engine, and seaplane ratings. He has served as a research pilot for the FAA, concentrating on air traffic control operational systems, and is a former president of the American Institute of Aeronautics and Astronautics (AIAA), the seminal professional organization of the aerospace field. He is a retired vice president of SAIC, where he was responsible for all corporate civil aviation activities and previously served on the Council of the RAeS.

Richardson earned his undergraduate degree in aeronautical engineering at Georgia Tech. He went on to earn an M.S. from Newark College of Engineering, and a Ph.D. from California Coast University. He served for ten years on the Daniel Guggenheim School of Aerospace Engineering School Advisory Council, eight of which as its chair, and also supports the scholarship program at the School. 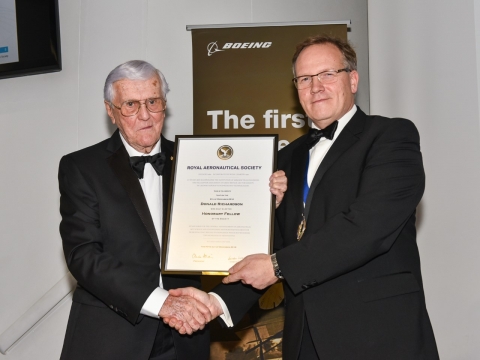