The Institute's Center for Enhancement of Teaching and Learning (CETL) recently announced that AE professor Jerry Seitzman has been chosen to receive the 2016 Class of 1940 Course Survey Teaching Effectiveness Award. The annual honor is given to faculty who have garnered a response rate of 85% or greater and an instructional rating of 4.9 or greater on their Course Instruction Opinion Surveys (CIOS).

Just uttering that litany of educational metrics seems to exhaust Seitzman - a guy who is always a little more comfortable questioning conclusions than accepting them.

“What it means is that a lot of students filled out those course evaluations,” he says, with a taunting smile. “So that’s just a number, really.”

Okay, so why is that number so large, we ask? And why did so many of them give you a superior ranking?

“Okay, you have a point there.”

So instead of asking Jerry Seitzman why he got this award, we asked him why he was ever in the running for it.

What was your original career plan when you went to college?

Gosh, I don’t think I really had a clue what my career would be when I went to college. I decided I liked engineering for various reasons, but I could have gone in a lot of directions. I had a verbal streak and analytical streak so that could have pushed me to law. And my father was in medicine, which looked interesting. I know I enjoyed what I thought engineering demanded – creative problem solving, math, science – and that was a good start. I thought mechanical engineering would be a good fit because it’s more focused on how devices work and

how you can manipulate them.

When did you decide to pursue teaching as a career?

It was actually pretty late in graduate school. I was training other graduate students and helping with some classes, and a friend said ‘Hey, you should be a teacher. You’re good at it.’ And I thought, ‘Hmm, you are probably right.’

Have there been teachers who’ve influenced your teaching?

Were there teachers who influenced me!? Yes! In grade school, high school, college – all along the way. I learned from all of them. They all had certain qualities that I’ve always tried to emulate.

They knew how to motivate. Good teachers don’t just tell you that you have to learn a bunch of facts; they find ways to make you want to learn. In fifth grade, I had Mr. Brewer for math. Now, I was a pretty good student, but Mr. Brewer had a way of making me get really interested in stuff. He didn’t just give you math problems to solve; he gave you puzzles and games that made you learn how math worked. Things could have easily gotten dreary and I could have gotten disruptive, but he knew how to keep it interesting.

They were concerned and caring. In first grade, we lived on a military base but in second grade, we moved off the base. I remember my first grade teacher came to visit me – she visited all of her old students -- when we were in second grade. It’s something she did every year – just to check in. It wasn’t like she had to travel far. But it really mattered.

They related to students with a sense of humor. The good teachers I’ve had were never concerned about being on a pedestal. They were always trying to connect to the students, sometimes with jokes.

If you weren’t an educator at Georgia Tech, what do you think you’d have done?

Well that depends on how far back I could turn the clock…if I were just post-Ph.D. but pre-faculty, well, I’d probably lean toward industry, where I could have done something that involved engineering, technology, and people. I don’t think I’d have been happy working alone in a lab for 20 years.

How has teaching changed over the 26 years you’ve been doing it (23 of them at Georgia Tech)?

Well, certainly the technology available has changed, but that’s not really about teaching. Those are just tools. And the tools have changed. But for me, teaching really hasn’t.

It’s still a process of leading students down the path, through all of the facts, to learn how to think. In the classroom, my job is to model that process – usually by asking them questions that will clarify their own thinking. It’s also important to engage them – by talking, by telling a joke, by giving them a chance to solve a problem. Also, if you don’t give them a context and provide a high level view of the material, you run the risk of having them focus on which 10,000 facts they need to remember. Memorizing information is not learning. You can write all you want on the board, but if the students don’t have the storyline, it’s just a lot of information. My job is to help them see the patterns so they can understand the material or the problem-solving process. I hope I’ve gotten better. I think I have. 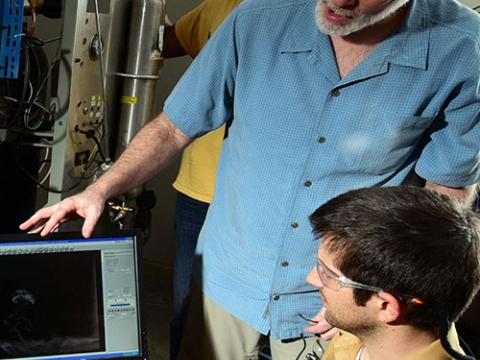