A team of Georgia Tech researchers is working with a private company to develop a new system that could (eventually) put you in flight.

That is: only you. No carry-on. No peanuts. And no flight attendant to show you the emergency exit.

The system that could re-introduce a new generation to air travel is the Soldier Vertical Mobility System (SVMS) - a backpack-type propulsion system that allows individuals to hover, travel, and maneuver hundreds of feet above the ground before negotiating a safe, hard-surface landing. Researchers out of the Georgia Tech Research Institute (GTRI) are using a $65K Independent Research & Development (IRAD) grant to collaborate with the JetPack Aviation Corporation on the development of three specific subsystems that will catapult this concept into routine use.

“But last year, JetPack’s owner demonstrated its capabilities by flying around the Statue of Liberty. It’s real. And it really does look cool.”

from other funders who recognize the myriad practical applications for the system.

The original version of the system used some commercial off-the-shelf (COTS) components that the Tech engineers are now reviewing as they put together the next iteration of the SVMS. They are also adding new functionality to make the system more attractive to potential investors, like the military. Research engineers Courtland Bivens and Michael Mayo have been leading the collaboration and coordinating the integration of all subsystems into the SVMS.

“One of the things that needs to be worked on is landing. The jetpack itself is heavy – maybe 150 pounds. So if you come in for a landing with too much force, you could damage your legs,” says Mayo. “That’s one of the reasons we're working on an exoskeleton.”

Addressing the landing issues – and other challenges -- is a multi-disciplinary team comprised of engineers from the Daniel Guggenheim School (AE), the George Woodruff School (ME) and GTRI’s Aerospace, Transportation and Advanced Systems (ATAS) and Electronic Systems (ELSYS) labs. Together, the team is working with JetPack Aviation to develop:

"We are adding a  new control system, to automate many of the tasks that could otherwise distract the pilot.  This has great potential for soldiers in the field because they need to have their attention on other things -- like where the enemy is and where the next mission should fly," says Mayo.

"In the next iteration, we'll be able to demonstrate how the pilot can just push a button and control where he's going and how fast, without having to concentrate on it. The benefits for that, in wartime, are obvious."

Afman and his mentor,  Prof. J. V. R. Prasad who, are working on this system.

"The automation features of the system that we are developing will make it easy and safe to operate with very minimal training," says Prasad. 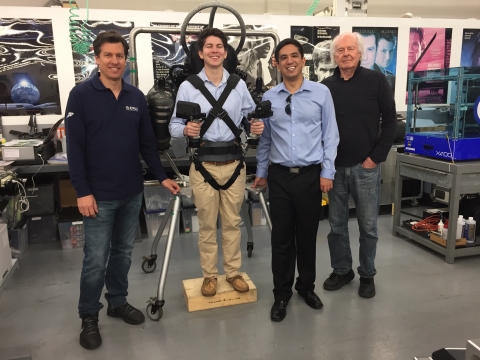