Springtime is recognition season at the Daniel Guggenheim School of Aerospace Engineering, where the talent and hard work of dozens of scholars become glaringly obvious as awards, honors, and scholarships are announced by professional societies, sponsors, and others.

It really is great to be GT-AE.

The AIAA and the editors of Aviation Week like to spot nextgen thinkers before they blast off;  that’s how they discovered AE graduate student Braven C. Leung . The Illinois native was included in the magazine’s 20 Twenties ranking of the nation’s top graduate and undergraduate students. Currently a Ph.D. student in the Aerospace Systems Design Lab (ASDL), Leung is working with Drs. Chris Perullo and Jimmy Tai on the FAA Continuous Lower Emissions, Energy and Noise (CLEEN) Program.  Leung has worked as a consultant intern for Booz Allen Hamilton and as a flight systems avionics intern for NASA’s Jet Propulsion Laboratory. He also interned as a systems engineer for Raytheon Space and Airborne Systems. He has a National Defense Science Engineering Graduate Fellowship, received the Dale Margerum Memorial Award for outstanding leadership at Illinois and was selected for the NASA SpaceOps Student Award for technical and scientific excellence.

During the three years he has been an aerospace engineering student at Georgia Tech, Sergio Sandoval has interned at the Jet Propulsion Laboratory, and conducted research with various AE professors. But the Mexico native's proudest accomplishments, by far, have been achieved through the Georgia Tech Office of Minority Education, where he has worked as a transfer mentor for several students. This spring, he received his fourth Tower Award in honor of his work with transfer students, and recongnition for having maintained a high GPA throughout his time at Tech. The  ceremony was made all the more special when one of his 'mentees' Juan Sebastian Rubio, received an OMED Transfer Student Tower Award.

"I love studying here, but none of it matters as much as helping another student travel  the road to success," says Sandoval, who also serves on the Hispanic Recruitment Team (HRT) for the Institute. "And to see Juan Sebastian doing well, it just makes me smile."

First-year AE graduate student Jillian Yuricich is one of three current AE students selected to receive a National Science Foundation Research Fellowship. The three-year scholarship will covers recipients’ tuition, fees and living expenses during three years of their doctoral studies. Yuricich  will focus on developing algorithms that optimize the vehicle dynamics of satellites – things like fuel consumption, best routes, desirable speeds, preferred attitudes, targeted locations. “If the vehicle can process those sorts of dynamic conditions, the humans involved in a flight will be able to execute on problems that require more finely tuned judgment,” says the Ohio State alumna, who works under the direction of Prof. Marcus Holzinger.

“I plan to use my NSF funding to push the boundaries of spacecraft propulsion,” says Brown, a Georgia native who earned his undergrad degree at AE last spring.

Another of Walker’s protégés, undergraduate Aaron Blacker, received an NSF to pursue his graduate studies in rocket propulsion at Purdue University. The New York City native, who also worked with Prof. Tim Lieuwen, will begin his

doctoral program this fall after completing an internship (his second) at SpaceX this summer. At Purdue, his research will focus on longitudinal combustion instabilities in liquid rocket engine chambers.

“Ultimately, I want to speed up and lower the cost of engine development by improving the prediction and design tools,” he said. “The NSF will give me freedom to pursue research that engages me.”

Doctoral student Shahzad Virani has been selected for a National Defense Science and Engineering Graduate (NDSEG) fellowship, a four-year, $153,000 award that will support his work with Prof. Marcus Holzinger. Virani is researching low signal-to-noise ratio electro-optical detection and tracking. Going forward, he will use advanced computational techniques to apply dynamic data-driven principles to help telescopes and other sensors intelligently use available resources in multi-objective scenarios.

“Dr. Holzinger and I had already planned out what I was going to pursue, generally, for my masters and Ph.D. –

electro-optical detection and tracking to advance space situational awareness,” says Virani, who earned his BSAE degree from Tech in 2015. “With this funding, I am no longer limited to projects that are specifically funded for Dr. Holzinger. I have the freedom to choose a project that interests me.  But I’ll continue the theory-to-hardware focus that his lab has had. That focus allows us to test out our theories on actual hardware like RECONSO, Omnissa, and the GT-SORT [telescope}.”

A 2017 NASA Space Technology Research Fellowship (NSTRF) will enable first-year graduate student Jack Ridderof to focus exclusively on his doctoral research in entry, descent, and landing. The 23-year-old Atlanta native is working alongside Prof. Panagiotis Tsiotras to identify a probabilistic method that will accurately describe the powered descent to the surface of Mars.

“Landing has been handled the same way for 40 years. This is a new approach. New developments in robotics have opened up the possibility that probabilistic methods can be used to model the powered descent of a vehicle from the entry stage [where it is in a parachute] to the landing stage,” says Ridderoff. “We have a process – landing - that is essentially uncertain, and we have a method that deals with uncertainty in the modeling process, so we are going to investigate.”

The GEM Fellowship program supports the academic and career aspirations of talented engineering students from underrepresented groups. First-year graduate student David Jovel will use his GEM to work with his advisor, Prof. Mitchell Walker, on research to improve the performance efficiency of Hall Effect thrusters in space vehicles. The Texas native, 28, says he was motivated to apply for the scholarship while working as a systems engineer for a NASA contractor.

“There are always hiccups on engineering projects, and, what I realized was, I wanted to be that guy at the command consul who would come up with the fix for those problems. That was going to take another degree,”

“And when I started looking into where I should get that degree, I asked around to see who was doing interesting stuff. One name kept coming up [AE professor Mitchell Walker].  So I actually stocked Professor Walker on Linked-in – asked him if I could study with him. He told me to send my resume and he’d consider it.”

Tifton, Georgia native Kreston D. Barron will use his GEM fellowship to earn his doctorate under the tutelage of Prof. Daniel Schrage. The two are currently exploring ISRU [In Situ Resource Utilization) technology to harness energy from the atmosphere on Mars. Ultimately, they want to use energy so derived to generate power for aerial and ground vehicles that will operate on Mars. Barron says it was Schrage’s vision that convinced him that the ISRU project was the right direction for his graduate work.

“I can appreciate the importance of details – that’s important to engineering – but I’ve always been a big picture person. So when I came back to Tech [for graduate school] and Dr. Schrage said he wanted to put a UAV on Mars, I knew I had to work with him,” says Barron. As a part of his GEM, Barron will work with Oakridge National Lab this summer.

. Lempert Student Paper Award in Diagnostics for Fluid Mechanics, Plasma Physics, and Energy Transfer for his paper entitled, “Simultaneous High Speed (5 kHz) Fuel-PLIF, OH-PLIF and Stereo PIV Imaging of Pressurized Swirl-Stabilized Flames using Liquid Fuels.” The award honors the legacy of the late Walter Lempert and is jointly sponsored by  AIAA’s Aerodynamic Measurement Technology (AMT), Plasmadynamics and Lasers (PDL) and Propellants and Combustion (PC) technical committees.  Each TC nominated one paper for the award with the winner selected by a panel of judges evenly chosen from the AMT, PDL and PC membership.

In selecting the paper, AIAA evaluators noted its “high technical quality and outstanding contribution to innovative advancement of diagnostics for fluid mechanics, plasma physics and energy transfer.” Chterev, who defended in mid-April, will formally receive the $500 award  at this summer’s AIAA Aviation & Aeronautics Forum and Exposition which will be held in Atlanta.

The Kentucky native and two of his classmates from the School of Mechanical Engineering (Seth Ableidinger and Davis Engelman) bested 27 other university teams in the mini-quad rotor match-up. Donning video goggles, these drone pilots radioed commands to their custom-designed vehicles, each of which was equipped with cameras that caught every twist and turn in the course. Willard, who also pilots UAVs professionally with the Drone Racing League under the handle “Wild Willy,” took home third place overall in the individual category.

College of Engineering’s annual Undergraduate Research Symposium. The 22-year-old Cornwall, New York native has been working with his mentor, Prof. Mitchell Walker to design and test a novel megnetohydrodynamic generator. This semester he has been interning at NASA Marshall where he is working on a computer vision method to extract modal data from video for the NASA  Space Launch System. This summer, he will intern with the SpaceX Dragon II team.

In ceremonies held earlier this spring in Washington, AE doctoral student Nicholas A. Rock was named Student of the Year by the Federal Aviation Administration’s Center of Excellence for Alternative Jet Fuels & Environment. The FAA was joined by the DOT and the Council of University Transportation Centers (CUTC) in acknowledging Rock’s research, which seeks to identify the mechanism(s) that trigger engine-stopping ‘lean-blow-outs’ in airplanes. While not a problem with conventional fuels, lean blow-outs become a possible danger when alternative jet fuels are tried.  “If we can identify what the

mechanism is, we can look at ways to work around it when we try out new fuels,” says Rock, who received his BS from Brigham Young University.

Graduating AE senior Julia MacOn was selected as the 2017 Student of the Year for the Southeast Region by Sigma Gamma Tau (SGT), the aerospace engineering honor society. The Goffstown, New Hampshire native served as president of the GT chapter of SGT this year and is the fourth Georgia Tech aerospace engineering student in as many years to claim the title.

"It feels really great to be recognized for all the hard work and time I put into Sigma Gamma Tau and the AE department for the past few years. It helps me realize I really made a lasting impact on the organization and the school, and I was just enjoying being involved.”

“These power systems are capable of operating on syngas, and natural gas fuels oxy-combustion,” says Karimi, a native of Dubai. “And this award will help me get a better idea of the issues affecting my research.” 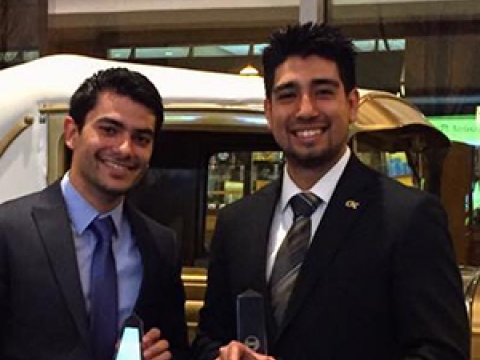