A hand-launched aerial vehicle used to transport scientific specimens from a marine vessel to shore, "Pelican," took home the $1,000 prize for an aerospace engineering project at the 2017 Capstone Design Expo, held April 25.

All told, more than 1,200 graduating seniors participated in the elaborate expo, which attracted more than 200 expert judges to the McCamish Pavilion from 4:30 until 8 p.m. Two-hundred-forty-two teams from 11 Georgia Tech schools made this one of the most popular expos in the event's history.

Taking home the $3,000 prize for the best project overall was “Pump It Up for Kracken", a water sampling system designed students from the School of Mechanical Engineering for deployment under the Antarctic ice.

The Daniel Guggenheim School of Aerospace Engineering fielded 13 teams. All except one of those teams focused on one of three engineering challenges, put forth by the Boeing Company, the American Helicopter Society (AHS), and the American Institute of Aeronautics and Astronautics (AIAA). One team - MACH-ingjay - took up a design challenge put forth by NASA.

"We had to focus on developing maximum cruise efficiency at supersonic speeds," said MACH-ingjay team member Ali Erktin. "Since this was conceptual, not experimental, sorting through the data was the biggest task."

Team Pelican - and two other teams - focused on Boeing's AerosPACE challenge: to work remotely with student engineers from two other universities to design an aerial vehicle capable of deployment on an emergency, scientific, or commercial assignment. Team MERLIN designed a reconnaissance vehicle capable of traveling as far as 25 miles to film conditions during forest fires and other emergency situations. Team RamBoeing designed an aerial vehicle for doing border surveillance.

Two other teams took on the challenge put forth by AHS: to design a rotorcraft capable of hovering as long as 24 hours while traversing about 3 nautical miles of terrain. Though they didn't win the top prize for their engineering, Team Helluvacopter got props for finesse: each of member of the team donned a colorful baseball cap that had a 'working' rotor atop.

The AIAA challenge attracted entries from seven teams, each of which designed a six-seat and an eight-seat business jet using designs and parts that were 70 percent identical. Teams were judged by their ability to meet these basic requirements as well as their project's fuel efficiency, economy of operation, profitability, and overall customer satisfaction. This is where the competitive spirit  reared its head among the budding engineers.

that proved his vehicle's superiority to others in the field of business aviation.

"When it comes to maximum range, with the maximum number of people on board, we beat the Citation XLS, the Phenom 300 and the Gulfstream G-150," he said.

Team Coronis took a different tack -- designing their plane to take off on a shorter runway, thereby allowing it more flexibility to deploy from a variety of airports. T

"We are targeting an audience [for business jets] that wants convenience, not excuses," said Team Coronis member Daniel Wise. "Our design meets the FAA certifications, which is hard, and its 2500-foot runway beats the competition by at least 1,300 feet." 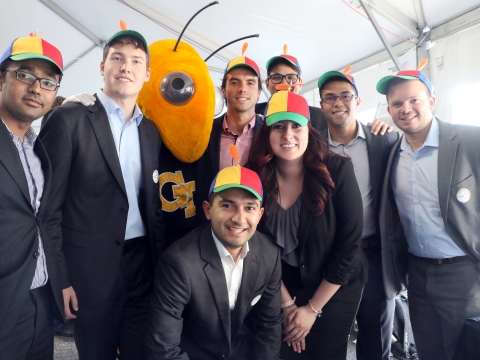 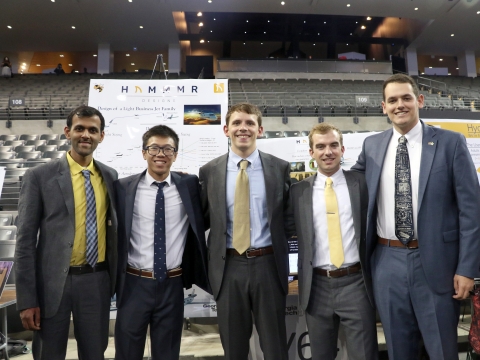