Daniel Guggenheim School of Aerospace Engineering alumnus James McConville has been nominated to the post of U.S. Army vice chief of staff. If confirmed by the Senate Armed Services Committee, McConville, currently a lieutenant general, will rise to the rank of four-star general.

McConville has a special connection to his alma mater: in addition to earning his MS degree here, he is the brother-in-law of Regents Professor Dimitri Mavris, the director of the Aerospace Systems Design Lab.

The vice chief of staff position comes with responsibility for the day-to-day operations of the army and a designation as the senior army aviator. McConville is the current U.S. Army's deputy chief of staff for personnel, a position in which he has made numerous changes to army personnel management. He previously served as commanding general of the 101st Airborne Division and Fort Campbell in Kentucky.

A native of Quincy, MA, Lt. Gen. McConville began his 36-year career in the military as an infantry officer after graduating from the United States Military Academy (West Point). He attended Georgia Tech for graduate school and was a 2002 National Security Fellow at Harvard University.

During his time at Georgia Tech, McConville was part of a team of students that won the 1989 American Helicopter Society/McDonnell Douglas Helicopter Student Design Competition by designing a low-cost light utility helicopter, according to Flying Magazine.

McConville has already served in many staff assignments and is the recipient of the Distinguished Service Medal, Legion of Merit, and the Defense Meritorious Service Medal. He is a veteran of the Iraq and Afghanistan wars.

McConville is the latest in a history of AE grads who have attained four-star general status in the military. Admiral James A. "Sandy" Winnefeld Jr., B.S. AE '78,  retired in 2015 after attaining the position of vice chairman of the joint chiefs of staff. 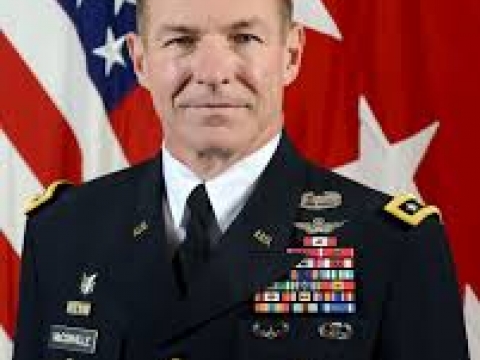