CoE Dean Gary May: Five Things You Should Know

CoE Dean Gary May: Five Things You Should Know
Advice to Aspiring Engineers from the College Dean
May 3, 2017

There’s a calm that follows CoE Dean Gary May – through the exhilaration of high achievement, the adrenaline of a big challenge, and the chaotic nadir of failure. The guy doesn’t outwardly budge. Inside? That’s another matter.

Colleagues will tell you Gary May is always tossing around ideas, mulling strategies, reviewing possibilities. We wouldn’t want to play poker with him, but, for the last 26 years, Georgia Tech has been well-served by this School of Electrical and Computer Engineering alumnus.  With equal measures ambition, wisdom, and cool, Gary May has led the CoE to a position of unparalleled prominence in the competitive world of higher education.

On July 30, he will lend his gifts to the University of California at Davis, where he will serve as that school’s next chancellor. We think they picked the right guy.

“Right after I accepted the position, my wife LeShelle and I visited [the Davis] campus, where we were met by protesters who didn’t like one of the boards I serve on. One kid approached us and offered to shake our hands, but his hands were covered with red paint. Now, I was a student activist, so I understand the importance of feeling passionately and of expressing yourself. But you’ve got to engage, not insult. So I said to him ‘Well, I’m not going to shake your hand with that red paint on it. That’s not going to work.’ A little while later, that same kid came back with his hands washed, And he asked for a photo with LeShelle.”

Before he returns to California for good, we asked Dean Gary May to dig deep into his resume - and his life - to give the Class of 2017 some advice. The following is his answer to our challenge: Five Things You Should Know.

1. If you are interested in engineering, try it out for more than one degree. You might be surprised where you land.

When I was in high school I was attracted to engineering because I wanted to use the principles of math, science, and the physical world to make a better world. That’s what engineers do, so I was on to something. But the actual process of engineering is a lot slower than I’d expected. What I found as an intern at McDonnell Douglas [in high school and college] was that there’s not an ‘aha moment’ every day in engineering. As an engineer you are not always discovering new things. You are working on things. Following leads. Eventually, though, you see how the work you are doing in your area has made it to the manufacturing stage and to actual devices where it makes an application better. Even as a student, I was able to help develop some software that was eventually used in avionics – probably an F-18.  Of course I was supervised by a real engineer, but that was exciting.

Along the way, I also noticed something else: when you look around the company where you are interning or working, the people who are making the decisions and who have the good jobs with a better quality of life all have advanced degrees. In an odd way, that convinced me to go to graduate school…When  I graduated [from UC Berkeley with a Ph.D.], I have to say that the job offers I got from academia were at least as good as the ones I got from industry. At least the starting salaries were [laughs]. So, I gave it a try. Academia, for me, has been a great choice. I look forward to coming to work every day, to working with different people, to helping students achieve goals, and to setting different goals for myself. You set your own calendar and your own compass in academia. It’s never boring.

2. Mentors are important. Don’t overlook the ones you are born with.

At Tech, I developed a close group of friends – many of them remain so to this day. We felt like we were in the same fox hole, that Tech was out to get us. [Laughs] And we were going to win. We’ve always been there for each other.

But I also have to give a lot of credit to my parents. They led by example, and their examples are powerful.

My mom taught first grade and kindergarten for more than 40 years in the St. Louis public schools. She checked my homework every night and she taught me how to write, because she was a good writer. She was the first in her family to go to college, and she was in the class that integrated the University of Missouri, back in the day. There were about seven African Americans in her class. She said they got called names and had some unpleasant things happen, but she was proud to have gotten her education so that she could have the career she wanted, as a teacher. That was her plan and she accomplished it.  She modeled determination in ways I will never forget.

When I was a kid, my dad did not have a degree – he was a postal clerk and he didn’t go back to get his college degree until I was in college. But I always knew he was a very smart, very determined guy. He was adamant that my sister and I would get a good education and he did everything he could to make that happen. In grade school, he’d give me $1 for every ‘A’ I earned, which, when you get straight-A’s, is a good deal. Ten dollars could buy a lot of comic books in those days. And as I got older, I’d sometimes be struggling with a math problem that my mother couldn’t figure out. After I’d finally fallen asleep, he’d take a look at the problem and he’d solve it.  The next morning, he’d show me what he’d done so I could solve it for myself.

3. When people treat you poorly or underestimate you, ignore them. Keep going. If you let them distract you, you lose.

In high school, I had a physics teacher who was working with all of the interns at McDonnell Douglas. When he found out that I was going to Georgia Tech in the fall, he said ‘Oh there will be hundreds of Gary Mays at

Georgia Tech. You won’t be anything special.’ At the time, I suspected he said this because he was racist, but I didn’t focus on that. I went to Tech, worked hard, and I ended my first quarter with a 4.0. Right around Christmas, I ran into this physics teacher. I could tell he was desperate to find out how I had done. He wanted to hear me say it. But I didn’t. Finally he said ‘So how’d you do?’ And the only thing I said was ‘I did alright.’ I wasn’t going to go there. That was his thing, not mine.

Freshman year, on move-in day, someone had written ‘nxxxer lover’ under my roomate’s [“Chip’s”] name plate on our dorm door. My mother was a little frantic about that. Maybe it was because I was 17 and a little fearless, but I knew I had to ignore that sort of thing. I was here to get a degree, to become an engineer, and I had to have a laser focus. So I told my mother ‘Don’t worry. I could be rooming with Chip or I could be rooming with the guy who wrote that note. I’m rooming with Chip.’

It turned out that Chip was a good guy. And that other guy? I never met him.

Tech is a challenging place, no doubt about it. Even before I got on campus, Tech sent out letters to freshmen telling parents, essentially, ‘Your son or daughter did really well in high school, but don’t expect the same. Georgia Tech is demanding…’ I remember my mom was a little concerned after reading that.  I could see her thinking about it. So I said to her ‘I don’t care what that letter says. I’ve taken all of the tests to get in, and I’m

going to work hard, so I’m going to get straight A’s at Georgia Tech. ‘ And that’s what I did.

During my freshman orientation, they told us to look to our right and look to our left – one of you was not going to make it through. My attitude was: ‘I feel sorry for one of those other guys.’

I’m not saying it was always easy . It wasn’t. During my freshman year, someone talked me into taking honors calculus and honors physics, (and that physics teacher did not believe in partial credit!). The work was unbelievable, but I’m glad I was challenged. It trained me to think smarter and work harder. So that later on, when I had to choose my subfield in engineering, I chose electrical because it challenged me the most. The homework was not easy. The tests were not easy. But what I’d learned was: easy is no fun.

5. Success is the product of three things: talent, hard work, and luck. And a sense of humor never hurts.

As a student, I had a talent for math and science, which helped me progress through three degrees. But as a faculty, I had to focus on generating research, on individual scholarship, and creating a successful classroom experience. When I moved from there to administration, I had to let go of being the sole focus and begin cheering on other faculty, promoting and celebrating their achievements as much as my own. It tried my talents in different ways. I grew as a result.

I learned a lot of this while working under [former Georgia Tech president] Wayne Clough for three years. Day in, day out, I marveled at how he handled things. Not only was he wicked smart, but he was genuinely humble and very interested in everyone – from the custodian to the most esteemed researcher. He appreciated not the title they held, but the effort they put forth. He reminded me that, were I not lucky enough to end up where I am, I could easily be the person who’s sweeping the floors.

For me, that served as a reminder to judge myself not by what I’ve personally achieved, but by how much I’ve been able to improve the lives of others. This is also something that I heard a lot in the gospel music my grandmother loved. Helping others is the way you repay your own good luck. One of my proudest achievements to this day is mentoring a student from high school through his doctorate. He’s now a research engineer.  I continue to look for ways to pay it back.

I mentioned sense of humor because I’ve always found that when adversity strikes or the pressure is high, laughter will help me – and the people around me – to cope. Over time, I’ve attracted others who have the same attitude – in particular, my wife LeShelle. After accepting the position at Davis, I turned to her and said ‘I’ll bet you never in your wildest dreams thought you’d be marrying someone who’d become chancellor.’

Without missing a beat she shot back:  ‘You’re not in my wildest dreams.’

Like I said, laughter is always a good thing. 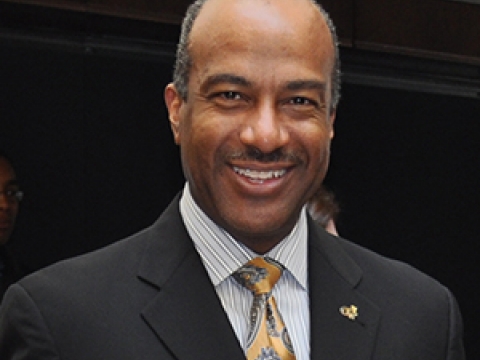