As NASA pursues missions that will go deeper and deeper into space, new propulsion technologies are among the innovations that are constantly being investigated - both by the scientists and engineers who will design and build them and by Congress, which will, perhaps, fund them. On June 29, the House Committee on Science, Space & Technology hosted a hearing "In-Space Propulsion: Strategic  Choices and Options" to gather more information about future propulsion technologies.

Professor Mitchell L. R. Walker II was one of six experts called to testify at that hearing, and, though he spoke in his capacity as a recognized thought leader in the field (not as a faculty of Georgia Tech), we are publishing his testimony, below, because it could easily have been lifted from one of his college lectures or from a discussion he might have with an ambitious grad student. In it, Walker gives a well-informed perspective on a technology that will continue to define the debate on space exploration. We think our readers will be impressed with his thinking on the subject.

Mr. Chairman, Ranking Member Bera, and members of the Subcommittee, thank you for the invitation to share my views on strategic investments in America’s in-space propulsion technology program.

I have been fortunate to serve on the faculty of the Daniel Guggenheim School of Aerospace Engineering at the Georgia Institute of Technology since 2005. It gives me great pride to work closely with undergraduate and graduate students as they develop into the space propulsion engineers and scientists of our nation’s future.

I presently serve as the vice chair of the American Institute of Aeronautics and Astronautics Electric Propulsion Technical Committee, an associate editor of the Journal of Spacecraft and Rockets, and the general chair of the 2017 International Electric Propulsion Conference. I am here today as an individual and the views I express are mine alone.

NASA has been a leader in the development and flight of electric propulsion technology. NASA flew its first electric propulsion device in 1964. In 1998, the NASA Solar Technology Application Readiness (NSTAR) ion propulsion system flew on NASA’s Deep Space 1 spacecraft. The NSTAR ion engine enabled a trip that included flybys of an asteroid and a comet. In 2007, NASA launched the DAWN spacecraft that also uses the NSTAR ion engines as primary propulsion. To date, DAWN has orbited both Ceres and Vesta. Scientists will continue to embrace the unique capabilities of this technology to explore of our solar system.

All-electric spacecraft coupled with low-cost launch vehicles enabled our nation to recapture the global launch vehicle market for commercial satellites. To remain economically competitive with this success, all launch vehicle providers are forced to upgrade their systems. In addition, Europe and Russia continue to make significant investments in electric propulsion. India and China each launched their first electrically-propelled geostationary satellite this year. Japan is scheduled to launch its first all-electric commercial satellite in 2021. Electric propulsion is recognized as a competitive factor in the technology portfolios of these countries.

There are three activities that I strongly believe will bolster our nation’s leading position in electric propulsion technology. First, investments are required in electric propulsion technology across the spectrum of expected time to return on investment. Second, the nation must invest in ground-based test facilities to develop and then fly the next generation of electric propulsion devices. Third, NASA must maintain a steady stream of investment in university research programs to ensure that the unique intellectual talent required to fly high-power electricpropulsion systems exists when the nation is ready to execute on these ambitious missions.

The role of electric propulsion in the exploration of our solar system, economy, and security will increase in the coming decades. Thus, investment in NASA’s electric propulsion program helps maintain our leading position in space technology, aids the economic competitiveness our nation, enhances our understanding of the physical world, and inspires current and future generations to pursue STEM careers.

Thank you again for the opportunity to be here today. I look forward to your questions. 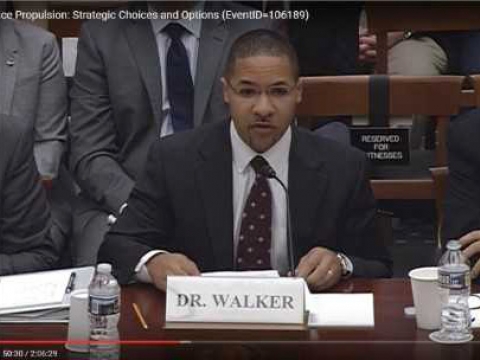