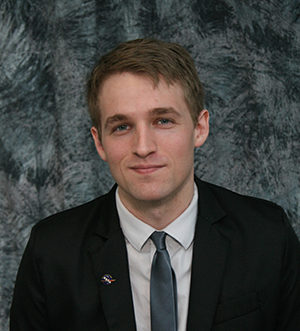 It’s been a busy year for Kenneth W. Smith.

In January, he moved from Virginia to the Georgia to complete his master’s degree at Tech. He was also named to Forbes’ 30-Under-30 list for outstanding young scientists. The Georgia Space Grant Consortium recently awarded him a grant to support his graduate work, and the Global Space Summit just asked him to travel to Abu Dhabi in February to give a talk. All the while, he continues to do graduate research for Tech and for NASA Langley, where he works (remotely) as a loads and dynamics engineer.

Smith shifts in his seat and fidgets with his Cleveland Indian’s cap when we start listing his accomplishments. He came to AE so he could dive deeper into something he is curious about - research on vibration-induced loads on launch vehicles and crew capsules.

He’s not here to talk about it. Or himself.

But if we are looking for an explanation for how this Streetsboro, Ohio native found himself in the role of rocket scientist, Smith wastes no time giving us one:

“To a certain extent, we’re all reflections of the people we have in our lives,” he says, with some palpable relief. “I’ve had some great people behind me, the number one being my Dad [Kenneth Smith].”

Whether it was playing guitar of suiting up for baseball, the elder Smith always backed up his namesake with solid advice and words of encouragement:  work hard, follow-through on commitments, and think of other people first.

“When you have that kind of support, it’s easy to get up when you’ve been pushed down, because you know you 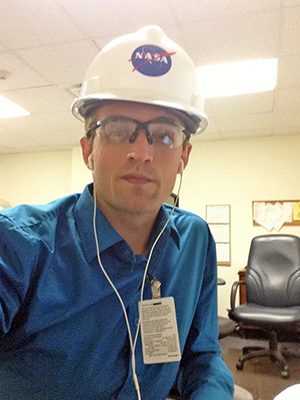 won’t be down forever.”

To be sure, Kenneth W. Smith knows what it’s like to be down.

It was only a few years ago that a job loss in his family forced the younger Smith to quit school and take a job as a dye-cutter at a label manufacturing company. The hours were long, and the work, monotonous, but it paid the bills. And it offered him an unanticipated benefit…

“In a way, I was kind of lucky, compared to other guys, enrolled in school, who didn’t maybe know what they wanted to do. I had 10 hours a day to think about how I was going to do something else, to imagine what it would be, and plan how I would get there,” says Smith.

It was right about that time that a college friend convinced Smith to volunteer at the Great Lakes Science Center. So, after working a 10-hour shift in the factory, he would don a rainbow-colored lab coat and good-naturedly answer technical questions from pint-sized scientists. He also took some time to visit the nearby NASA Visitor’s Center.

That’s where something clicked. Call it curiosity. Or passion, even. Smith developed a vision for what he wanted to do for a lifetime.

“Before, I’d been a bio-chemistry major, but, after that, I spent my days planning how I could become an aerospace engineer,” he says. “It’s funny how something so negative in my life turned into a positive.”

When finances improved, Smith transferred into the newly established engineering program at the University of Akron, where he earned a 4.0 grade point average and co-authored three papers.  After co-opping at NASA-Glenn, and NASA-Langley as an undergraduate, he confidently applied to the aerospace programs at Georgia 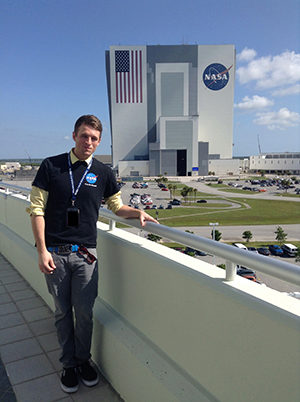 “I was rejected by all three,” he says flatly, but without rancor.

“But I had a really lucky break, then, because NASA-Kennedy was looking for someone who was fluent in dynamics. I had worked as a dynamics analyst at NASA Langley, so I got the job, and that’s where I met my mentor, James Ristow, who gave me my first introduction to loads and dynamics.”

It’s also where he made connections with another future employer, SpaceX.

“I had never even thought of going to work there,” he says. “But I did.”

At SpaceX, Smith took a job as a dynamics engineer where he worked on the development of the new Dragon 2 Crew Vehicle for four months. He might have remained at SpaceX except for one thing: ambition.

“In the back of my mind, I wanted to be an astronaut, so I knew I had to go for a graduate degree at least,” he says. “So, in the summer of 2016, when I got into Georgia Tech’s distance learning program and SpaceX wanted me to stay on, I turned them down so I could go back to NASA while I was studying at Tech.”

In January of 2017, after completing NASA’s 18-month residency requirement at Langley, Smith put everything he owned in his car and drove down to Atlanta to finish his graduate program. On his first night in town, he crashed on a friend's couch, excited about the journey ahead.

“Well, the next morning I went out to my car and someone had robbed me of everything I owned – all my clothes, my guitar, even my guitar pedal. I literally only had underwear and socks,” he says.

“It was kind of sad, because it was just my first day here…but, on the other hand, you gotta take things in stride. I was finally at Tech, and my life wasn’t in jeopardy.”

Smith hasn’t spent a lot of time looking back to that day. He’s too busy, working on NASA-inspired projects in Prof. Massimo. Ruzzene’s Wave and Propagation lab. He’s also working with a NASA engineer, Dr. Isam Yunis on research that explores the dynamics and structural integrity of future spacecraft that will one day get us to Mars.

And then there’s Akronauts Rocket Design Team: a non-profit he co-founded in 2014 to do STEM outreach back in his native Ohio. He started the organization while he was still an undergrad student - in part, because he wanted to develop a rocket to use for studying blood flow in a weightless environment.

“My initial launch inquiry on price - $100,000 – was way out of my budget…until it occurred to me that maybe I could develop my own rocket,” he said. “And who better to help me do it than a bunch of science-hungry kids from the community?”

Over the last three years, the Akronaut Team has recruited hundreds of K-12 students to take part in rocket competitions. It has also sponsored STEM days for home-schooled students at the Ohio Aerospace Institute. It has even mentored some students as they design science payloads for the team’s rocket. The day-to-day operations are handled by Dr. Francis Loth and Mrs. Victoria Jackson - colleagues from his University of Akron days - but, even at a distance, Smith remains actively involved.

If his schedule seems a little frenetic to some, it is actually soothing to Smith.

“I have experienced what it was like to be a college dropout, to not be able to afford a home or food for your family, to feel like you have potential, but no opportunity to explore it. It’s made me a little obsessive about volunteering, helping others. Through cooperation, I’ve seen people drop their divisions and find their commonalities to realize greater things. If I can continue to give back, I am confident that I will be able to do greater things, too.” 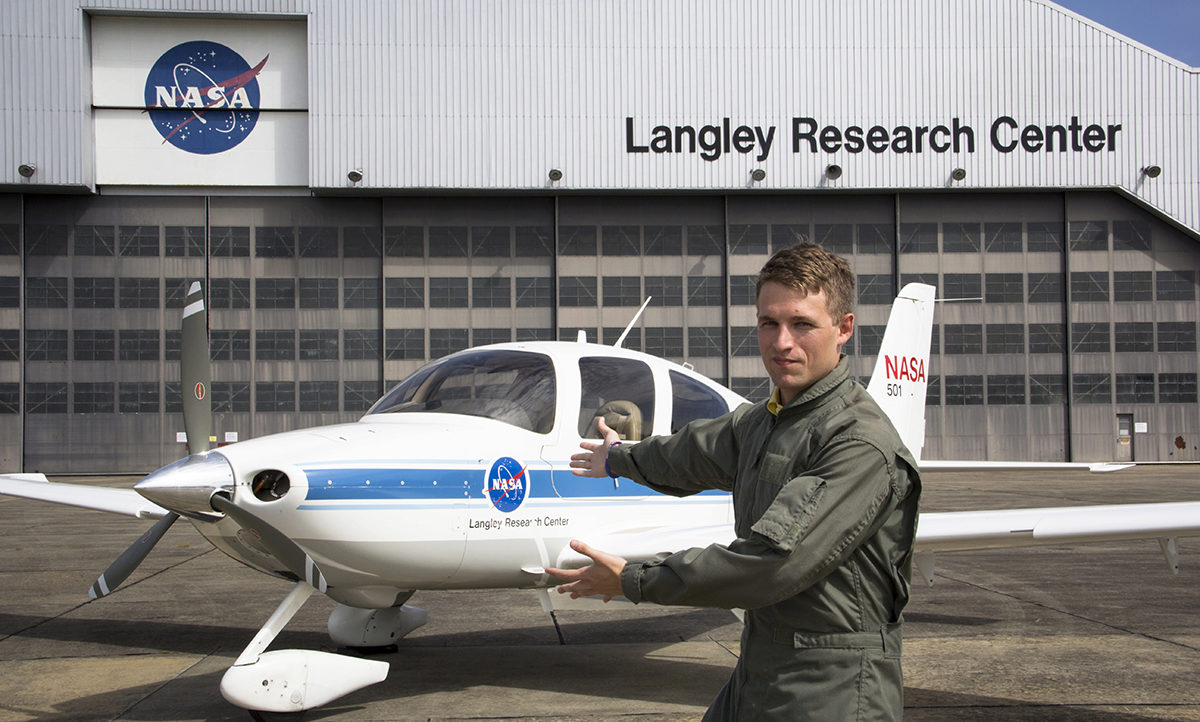 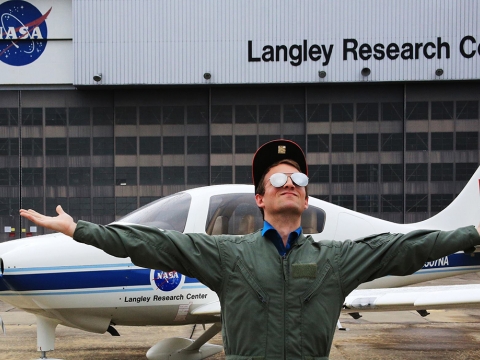