Graduate student Chloe Downs and fourth year undergraduate Yash Chandramouli, were among the 24 students nationwide who were selected from a field of more than 100 applicants to receive the fellowship, which matches recipients with two professional mentors and summer internships within the commercial space industry. (The third Georgia Tech recipient, Golda Nguyen, graduated with a bachelor's degree in mechanical engineering and a minor in aerospace engineering in 2017.)

Named after an exceptional young commercial space entrepreneur who died last year, the Matthew Isakowitz Fellowship provides paid summer internships at 20 cutting-edge commercial  space companies for two dozen of the top undergraduate and graduate students in the STEM fields. In addition to their internships, fellows are paired with an industry professional to receive one-on-one mentoring for an entire year.

A native of Mamaroneck, NY, Downs, 22, has been assigned to former AE professor  Robert Braun as her year-long mentor. She will spend the summer working in the manufacturing division of OneWeb Satellites, a company whose goal is to provide high-speed Internet access to unserved areas of the globe by launching a swarm of 900 communications satellites.

"I haven't worked on satellites at Tech, yet," said Downs, who earned her undergraduate degree in astrophysics at the University of Virginia.

"But, as an undergraduate, I worked on the MINXSS cubesat, comparing temperature and power consumption data to the models that were developed prior to its launch. I'm definitely interested in pursuing the commercial side of aerospace."

At Tech, Downs has worked in the Aerospace Systems Design Lab where she is contributing to the development of Foresight, a software program that seeks to predict and analyze Georgia Tech's water and electrical consumption -- critical information for the development of emergency management programs. She is also working on a decision-making framework that could eventually help NASA to decide when and whether to make another trip to the moon.

"All of my work right now is focused on learning how to approach complex problems and how to solve them," she says. "We are using the same tools -- like sysML, a computer language - as other engineers in the program. Our projects are just different."

Downs plans to pursue a Ph.D. in aerospace engineering.

Atlanta native Chandramouli, 22, is also headed for a doctorate in aerospace engineering,  His upcoming Isakowitz internship will match him with an engineer in OneWeb's Washington, D.C. office. As a part of the fellowship, he and the other 23 Isakowitz fellows will be flown to Silcon Valley midway through the summer for a summit, during which they will network with leaders in the industry, visit space start-ups, and work on their entrepreneurial skills.

Chandramouli was a latecomer to commercial space, but that hasn't dampened his enthusiasm for it..

"I came to Tech thinking I would work on aircraft, but when I took  Professor [Glenn] Lightsey's Vehicle Performance class I got introduced to the world of smallsats. That was exciting because I'd always thought that if I worked on the space vehicle side of things, I'd be working for 20 years and maybe never see my work fly," he says. "The way commercial space is working these days, that's just not true anymore."

Since then, Chandramouli has worked on two AE-sponsored cubesat projects: RECONSO (with Prof. Marcus Holzinger) and Nimbus (with Lightsey) and his commitment to commercial space development has only grown. His internship at OneWeb, he says, is the perfect next step.

"They are using space to solve one of the biggest issues of the modern era: Internet access. Right now, there are 4 billion people who do not have access to the Internet. People in rural areas, in disaster zones, in places where there are no fiberoptics. But they [OneWeb] are using space - a place that's open to us all - to solve that. And that, to me, is a perfect example of what space can do."

Chandramouli one of the founding members of the Georgia Tech chapter of Students for the Exploration and Development of Space (SEDS). 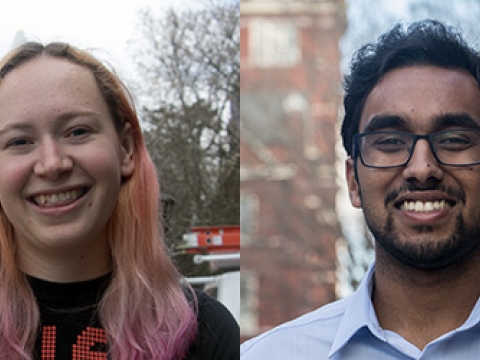