Georgia Tech President G.P. “Bud” Peterson has been selected by the White House as a candidate for the National Space Council’s Users Advisory Group. The announcement was made by Vice President Mike Pence, who chairs the council. The team is meeting for the first time this morning at Kennedy Space Center in Cape Canaveral, Florida.

Peterson is the only higher education candidate among the group of 29 people. He’s joined by the CEOs of Boeing, Lockheed Martin Corporation and Northrop Grumman; the president of SpaceX; and five astronauts, including Buzz Aldrin; as well as other leaders.

“Georgia Tech has a long standing culture of engaging and partnering with U.S. space and defense industries, and I am honored to serve along with these industry and government leaders,” said Peterson. “Through partnerships with industry and the federal government, U.S. research institutions can support our nation’s strategic space and security needs, helping the U.S. maintain its leadership position at the forefront of technological innovation.”

Peterson’s early career includes working as a research scientist at NASA’s Johnson Space Center in Houston, as well as conducting independent research as a faculty researcher for both NASA and a number of aerospace companies.

Throughout his career, Peterson has played an active role in helping to establish the national education and research agendas, serving on many industry, government, and academic task forces and committees; research councils; and advisory boards. They include NASA, the Office of Naval Research, the Department of Energy, the National Research Council and the National Academy of Engineering. He is a member of the National Science Board.

The National Space Council and Users Advisory Group are expected to focus on regulatory reforms in the commercial spaceflight industry this morning. It is the second meeting of the council, which was relaunched in 2017 by President Donald Trump.

According to the White House, Peterson and candidates await official appointment by the administrator of NASA. The advisory group is tasked to fulfill President Trump's mandate to "foster close coordination, cooperation and technology and information exchange" across our nation's space enterprise. 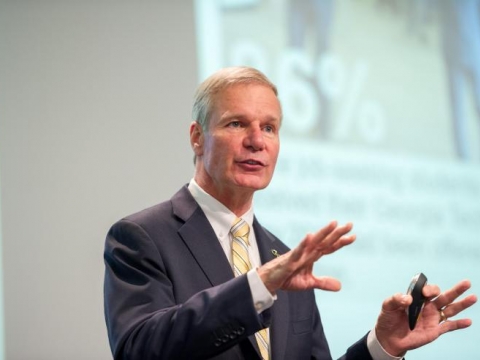