A Mars-bound, mineral-hunting drone designed by a team of eight AE and ME undergrads won top honors in the systems engineering category from the Vertical Integrated Projects program.

The design for"Chariot Drone" was produced by students from the two schools as a part of a year-long class that tasked them to define both the challenges and the solutions to an open-ended engineering problem. That problem - supporting humans' ability to live on Mars - forced students to collaborate across the discipline boundaries to design a working drone. It also challenged them to think a little differently about their studies.

"We had to define the problem, the project really, and we had to come up with the questions to ask" said Emily Glover, a third-year student from Lawrenceville, Georgia.

"It's not something that, as a student, you are used to doing. Usually, your professors are giving you those things to start you off."

The team developed two main objectives for their drone's travels: to search for silica, which can be ground down and used for water filtration, and to find iron oxide which can make ferrock - a substance similar to cement. Both substances will allow future colonizers to settle on the red planet.

Over the course of two semesters, the group has made some evidence-driven changes to their original plans. For instance, they've added a rover to the mission so that Chariot Drone will have a land-based charging station and a temporary shelter. An earlier plan to design jetpacks was quickly jettisoned after the team consulted with AE research engineer Pablo Afman, himself a jetpack designer.

"Drones have greater potential because they can operate autonomously, can travel far, are more maneuverable, and can adapt to different missions," Glover explained. Another team continued to work on jetpacks, while Glover's team started designing Chariot Drone.

The semester is over, but the team's ambitions have not quieted. The team is actively planning to use their $2,000 VIP prize money to tweak their work, and there is talk about turning the collaboration into an official RSO (registered student organization) next year so that they can expand support for their work. Meanwhile, over the summer, Glover said they are still conducting trade studies to determine whether attaching a drill would help or hinder their mission. There's no doubt that a drill would expand the drone's investigative abilities, but it does have a major drawback: weight.

"Carrying more weight is expensive in space," Glover explained. "About $1,000 per kilogram to transport it, so you have to really look at it. The extra weight would reduce the length of the mission because it would eat up fuel to transport it."

Their VIP project was launched as a class project, but, Glover points out, the teams had to develop a very independent approach to their work. Faculty were not directing their mission planning. The group had to weigh their options and seek out advice from trusted sources as needed.

Luckily, there were plenty of trusted sources around the AE School.

"Dr. [Lakshmi] Sankar introduced finite blade element theory to me and he explained the benefits between different blade types, and which one would be the best design for the mission at hand" says Glover. "And a program I learned in Professor [Brian] German's class,  Virtual Sketch Pad (VSP) really came in handy."

Glover's newfound knowledge of VSP - a conceptual design tool for modeling aircraft - also helped her to get an internship at NASA, which was looking for exactly that skillset.

"The project we're doing at NASA is a lot like the one we've been working on," she said of her upcoming internship. "Only they're a lot farther along." 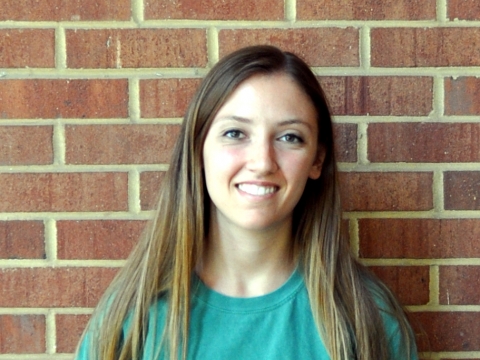