Announcement of the first-ever Bell Flight Fellowships was made on April 24 by AE alumnus Dr. Al Brand --  Sr Technical Fellow at Bell Flight  - during the Georgia Tech Chapter meeting of the American Helicopter Society. Awardees were chosen based on their commitment to, and accomplishments in, the field of vertical lift.

"Our scholarship program seeks to cultivate engineers with a passion for vertical lift. We know there are many of those engineers here at Tech. Bell has quite a few of the School's grads, including long-term employees like me,

and many recent hires," said Brand, as he stood next to his former AE classmate, AE professor Marilyn Smith.

(VLRCOE), a center that is directed in part by Smith. The students are:

Adam Bern is a doctoral student of Prof. Smith's who is working on characterizing nonlinear aerodynamic transients as part of the VLRCOE task, Prediction of Nonlinear Aerodynamic Transients for Maneuvering Rotorcraft Analysis, a joint effort with the University of Maryland and the University of Cambridge.

Bern m graduated in 2016 with a BS in engineering physics from Cornell University.

Curtis Peterson is a doctoral student in the School of Mechanical Engineering who is working on the experimental analysis of flow control for the VLRCOE project, Coupled Numerical/Experimental Physics Modeling of Fluidic Actuation for Aerodynamic Flow Control a joint venture of Prof. Smith and ME professor Ari Glazer.

Robert (Bob) Walters is an AE doctoral student working with Prof. J.V. R. Prasad who is working on model predictive path integral approach for trajectory guidance of rotorcraft shipboard landings as part of the VLRCOE task, Advanced Guidance and Cueing Algorithms for Rotorcraft Shipboard Landing Envelope Expansion.  A West Point grad, Walters is a former Army aviator with experience in the Bell 206, Eurocopter LUH-72, and Sikorsky UH-60A/A+/L/M.  He is in charge of all

Aaron Wilks is a MS student working with Prof. Smith’s group. He has worked on the slung loads reduced order modeling task from the prior VLRCOE center, which is being adopted for both slung load and UAV design by numerous organizations. He has continued his research on the VLRCOE task, Computational Modeling for Helicopter Slung Load Analysis, where he is working with Army Natick engineers to develop full computational capabilities for CREATE-AV for new slung loads analyses. This research is part of the initiative to reduce testing using simulation for certification.

"It is an exciting time at the company, with new commercial products like the recently certified 5-seat 505 and our 16-passenger 525 currently undergoing its flight test evaluation.  Bell is also developing the next generation tiltrotor – the V-280, for the US Army," said Brand.

"Bell’s new Innovation Team is on the frontline, developing new approaches to vertical flight. I look forward to

seeing these incredible students develop their capability and potential for our industry."

Smith lauded Brand and Bell Flight for strengthening the critical pipeline between academia and industry.

"We would like to thank Bell Flight for their continuing support of the GT AE program. Because of support such as this, we are able to maintain a great Vertical Lift Research Center of Excellence," she said. 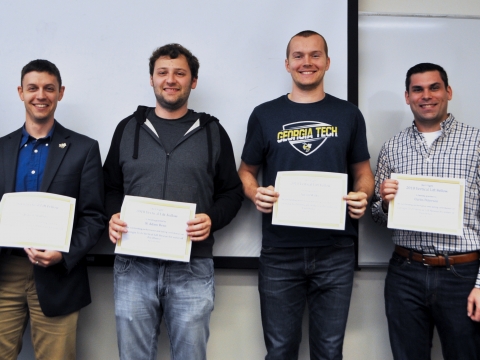