Ready to Launch. Four of the eight aerospace engineering undergrads who received awards during the Women In Engineering banquet, held April 10. From left, they are Erica Hulette, Emily Hale, Alexandra Matlack, and Jaqueline Tu.

with awards and industry-sponsored scholarships during the Women In Engineering Banquet.

Seven of the aspiring aerospace engineers received a total of more than $10,000 in scholarship funds, all from either United Technologies (UTC) or the Boeing Company. An eighth student, Dawn Andrews, received the Helen Grenga Award, which included a $2,500 stipend.

"We are inspired by all of these young women, whose academic acumen is only surpassed by their determination to reach new heights in their professional development," said Associate AE Chair Lakshmi Sankar, who picked up the Grenga Award on behalf of Andrews, who is interning at SpaceX in California.

"For any aspiring engineers who are looking for role models, these are the our best."

While all of the young scholars are keeping their options open, some will explore future career paths this summer through sponsored internships. Hulette will be interning at Skunkworks in Marietta, Georgia while Tu has committed to a summer internship with HAECO, a Greensboro, North Carolina aerospace company. Halloran will begin a research internship at GTRI in a few weeks and Zhang will be traveling to Cambridge Massachusetts for an internship at Draper Labs.

For the last 10 months, Andrews, the winner of the Grenga Award, has been interning at Space Exploration Technologies, aka SpaceX, as a customer operation, an integration, and a vehicle engineer. She was not able to attend the April 10 WIE ceremony, but will be back at Tech in December to graduate.

Each year, the Women In Engineering banquet brings together nearly 500 students, alumni, corporate partners and Institute leaders to recognize and celebrate the accomplishments of female engineering students who have achieved a cumulative GPA of 3.0 and above. 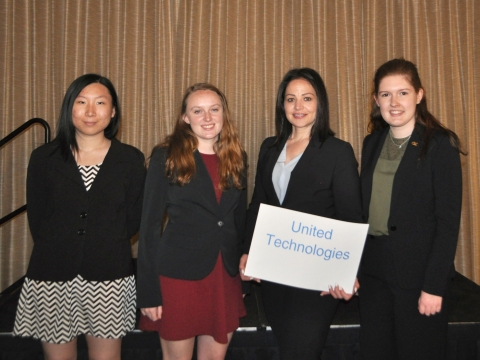