The Georgia Tech chapter of Sigma Gamma Tau, the honor society for aerospace engineers, announced the winners of its annual awards during the AE Senior Banquet, held April 9 in the Wardlaw Building.

Headlining the annual gala was Lockheed Martin CTO Keoki Jackson, a trained GNC engineer whose professional career has spanned nearly every aspect of the aerospace industry. Taking the microphone for a brief pep talk, he told listeners that there "is no better time in the last 30 years to be an aerospace engineer."

"The future is faster, more connected, more non-kinetic, and more autonomous than ever before," he said.

"You'll have people's lives in your hand so pay attention to those basic principles."

Reflecting briefly on his own career, he added a little bit of levity: "You should all be systems engineers," he said to an echo of laughter. He quickly returned to a more serious perspective:

"At the end of the day, we engineers do things that are complicated. We take complex problems, break them down, analyze them, and put them back together again. It's hard work, but hard work never lies in the real world. That same process of analysis will do you well in whatever field you enter. You can always fall back on systems skills." 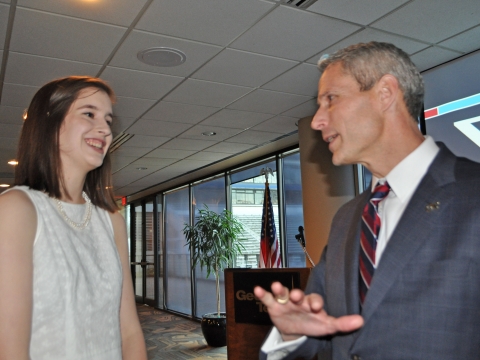