Two outstanding AE undergraduates have been selected to receive scholarships inspired by the late Donnel W. Dutton, an AE alumnus who served as the second  chair of the Daniel Guggenheim School (1943-1963.)

Joshua Siniard, of Kennesaw, Georgia,  will receive the Donnel W. Dutton Outstanding Senior in Aerospace Engineering Award, a $1000 scholarship, in recognition of his high grade point average (4.0) and his many accomplishments while at Tech.

Sharing the distinction of having the highest GPA is Siniard’s classmate, Yash Chandramouli, 22, of Johns Creek, Georgia, who was named to receive the Aerospace Engineering Outstanding Senior Scholar Award, a $1000 scholarship also funded by Dutton and his wife, Ruth.

Both Siniard and Chandramouli said that they never took their good grades for granted. Neither, too, did they focus on them. At the end of the semester, they considered themselves honored to have survived a challenge to their grasp of the material.

“Its funny – every semester there was this very real anticipation that some class would mark the end of the [high gradepoint average] streak,” said Siniard, who has worked closely with Prof. Mitchell Walker. “So I just tried to focus on gaining a foothold on the material. Really understanding it. Because I knew I’d have to use it again in another class. And, eventually, in the workplace.”

An aspiring spacecraft system designer, Siniard has worked in Walker’s High Powered Electric Propulsion Lab testing thruster prototypes in vacuum chambers that replicate space conditions. The work has put him in direct contact with industry engineers from other countries – an experience that has broadened his view of the work.
“There have been a lot of rough sketches on white boards that helped bridge some language barriers,” he said. “It definitely sharpened the clarity of my communication.”

Siniard says he plans to work a couple of years before committing to graduate school. He’s currently looking for work as a systems engineer.

A member of Sigma Gamma Tau and a co-founder of Students for the Exploration and Development of Space (SEDS), Chandramouli is heading off to Stanford University to pursue his doctorate. Like Siniard, he views his grades as a happy result of an education that always kept him motivated.

“For me it’s nice to have that number on my resume, but I think that really just tells you I was impassioned about the subject,” he said. “Last semester was ridiculously hard. I took Space Flight Dynamics, one of the hardest classes there is. But that’s why I took it. I wanted to know that I was going to learn exactly what I needed to be successful. And the professor wanted that, too.”

"Ridiculous" might also describe the frenetic pace that Chandramouli maintained while at Tech. No matter how busy, he assures us, it was always his choice. In addition to pursuing several research projects in the Aerospace Systems Design Lab, he worked with Prof. Marcus Holzinger on the RECONSO cubesat project, and with Prof. Glenn Lightsey on the MicroNimbus cubesat. He also gave tours for the Admissions Office, served as a Student Ambassador, hosted a radio show, and participated in the Movement-As-One dance team.

“There were semesters where I thought I’d reached my limit, where I thought I’d have to drop something,” he said “But, then, I remembered doing that in high school, and how I always vowed to not give things up that will make me well-rounded. It’s been tough, but it’s been worth it.” 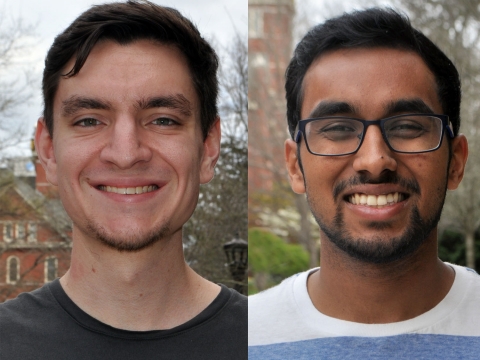