Beyond Materials: AE and ARO Bring Together Meta-Structures Researchers

Beyond Materials: AE and ARO Bring Together Meta-Structures Researchers
May 25, 2018

More than 60 academics, researchers, and thought leaders from across the U.S. gathered in Atlanta May 16-18 to map out the future of  meta-structures research – a multidisciplinary arena that looks at the synergistic relationship between meta materials and the expansion of structural capabilities.

Sponsored by the Army Research Office (ARO), “Meta-structures: Dynamics, Topology and Related Dynamics” was organized and hosted by AE professor Massimo Ruzzene, a renowned structural dynamics researcher whose abiding interest in meta-structures was more than returned by dozens of attendees.

“The great thing about this meeting is that there was a very dense collection of intellectual capacity right here, where we all were able to benefit,” said Lorenzo Valdevit, an associate professor of mechanical and aerospace engineering at the University of California, Irvine.

“This has given us an opportunity to bring together a discussion that is less stove-piped. Here, we have brought together the information the knowledge, the expertise of so many. And it will drive research in a good direction.”

Comments like this confirmed Ruzzene’s objectives in putting together the conference.

“I wanted to bring together people who are doing exciting work on meta structures-related topics so we could stimulate new discussions, new research,” he said. “It’s a new paradigm, and many people who are making important contributions to it might not know about it. But the connection becomes clear right away. The people at this workshop immediately recognized how important this collaboration is.“

The study of meta-structures goes beyond the component fields of structures, materials, and meta-materials, all of which have established themselves in the literature and have a recognized legacy in research. Meta-structures research, Ruzzene says, can provide new insight into performance and analysis that will help spawn a new generation of more adaptable and effective structures for an unlimited number of purposes.

In the short run, workshop organizers sought to introduce a larger rubric into which the work of attendees would lay the foundation for meta-structures research. Further down the line, however, the applications are obvious, says Ruzzene.

“In the next 10 to 15 years, the study of meta-structures could lead to the development of completely tailorable structures – structures that derive their properties through a careful and judicious arrangement of constituent materials. Imagine a shield that protects against bullets but can also be crumpled into a much smaller space for transportation, like a piece of fabric,“ said Ruzzene.

“Meta-structures research could develop a vest whose component parts (materials) react to a bullet by becoming harder, thus repelling the bullet. And, then, those materials could become softer, so you could compress it into your backpack or pocket.”

Ruzzene says that the field is still in its infancy. Studies still need to be conducted to fully explore fundamentals and to map out all areas of application. For instance, in addition to focusing on vibrations, researchers could apply meta-structure concepts to tailor buckling, fracture and failure mechanisms in structural components. He said he hoped that attendees would see the looming challenges and leave the workshop energized to work on them.

“Several opportunities are opened up by the study of geometrical and band topologies. And research on the presence of interfaces and interactions with the environment is very exciting,” he said. “Exploration of these interactions and the potential for affecting friction and possibly drag show a lot of promise.”

Ruzzene’s enthusiasm was echoed by ARO program manager, Dr.Sam Stanton, whose talk, “Can We Even Do This? Metastructures Ideas – from the Ordinary to the Outlandish” set the tone for the three-day conference. After listening to presentations of a few of his colleagues, Stanton was very optimistic about future collaborations.

"This could lay the foundations for unprecedented dynamic behavior of Army structures and components for remarkable agility, adaptability, and resilience of future systems,” he said. “Meta-structure research presents an opportunity to import cutting-edge concepts and ideas from modern physics to redefine what it means to be doing structural dynamics research.” 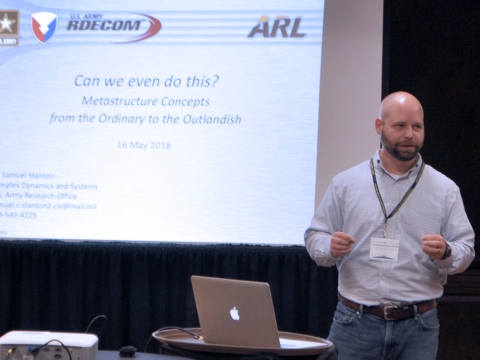