Vigor Yang: Five Things You Should Know
A semi-annual column where AE asks alumni and friends to reflect on the building blocks of success
May 3, 2018
Atlanta Georgia

Ask anyone who works with Vigor Yang, and they will guess -- with a high degree of confidence -- that the chair of the AE School deliberately chose a word that means 'physical strength and good health' for his Americanized first name. Nothing could describe him better.

Born in Taiwan as Weijia Yang, Dr. Vigor Yang has more than lived up to the challenge of his adopted moniker: NAE member. Academia Sinica recipient. Chair of the highest ranked publicly funded aerospace engineering school in country. His spry physique, clipt gait, and restless intellect all point to the obvious intentionality of his name. Right?

"When I was in high school, one of my friends picked the word 'vigor' out of an American dictionary and told me it sounded a lot like my given name, Weijia," says Yang with a generous laugh. "He suggested I use it because it sounded like my name...so I did."

Amusement aside, Vigor Yang does not dispute that his reputation precedes him. His frenetic energy has fueled a very public, very successful career as an academic, a researcher, and a thought leader. Surprisingly, the man behind this high-octane personality maintains a very low-key personal philosophy. It's one of the things we learned when we convinced him to share "Five Things You Should Know"

1. Be humble. Humbleness empties your mind of minor things, so you can concentrate on what's really important.

When I was a child, we did not have televisions or other forms of entertainment. So every night I would go outside and look at the sky. I just stared at the stars and wondered where I came from and where we were going. I was not scared, but I felt very small., very humbled. There was such uncertainty, so many things I did not know, but wanted to. The only thing I knew was how big the world is, how big the sky is, and how little we knew about it all. My mind was empty, but filled at the same time.

If I stayed out too long, I got called in to do homework. But I never forgot that feeling. It has helped me put things in perspective many, many times.

2. Never take for granted that you are smarter than others. It may be intelligence, but it might also just be privilege.

I have been able to attain many honors in my career, but I do not, fundamentally, think of myself as better than others. Part of this is due to the fact that I was born in the 50s, a time when it was possible to observe all of the changes that were taking place in the world without having to pay the price of social change. My parents worked very hard to put bread and butter on the table so I could read my books and go to school. When the Vietnam war was happening, I would often hear the B-52 bombers landing at a base near my house. And I remember being very moved when the American president, John F. Kennedy, was shot. The world was full of change. But I was able to keep going with my education, because my parents valued it. As an adult, I have to ask myself what they gained by so fully supporting their children?

The answer is: nothing is free. Every privilege is paid for by someone who came before us.

Many of the people who came before us -- our parents --  were not privileged to attend such elite schools as Georgia Tech. They might not have been able to attend college at all. Because of this, we should always look for ways to serve our community, to make use of the privilege we have been given.

3. Concentrate on learning now. You will get the lesson later on.

When I was a child, I did not play a lot with the other children. I was not interested in games and such [laughs]. But I did like to read. I read everything I could - American magazines, Chinese literature, poetry, anything. Now here's the thing: I had a very disciplined memory so I would memorize many things that I read. But I did not understand them at all. Especially the poetry and the literature. They were classics, but I had a very limited understanding of their meaning. Still, I memorized them because I was told that they contained wisdom. Years later, as I got older, I was able to think back to what I'd memorized and I found that wisdom. The contents and the spirit of those books now resides with me forever.

The wisdom you are bound to attain will not come to you on your own timetable. You must invest in learning early on, and have faith that the wisdom will reveal itself with age.

4. Trust other people. Always believe in their best intentions. Even if it feels a little risky, the rewards are greater.

When I was a student at Cal Tech, I went to the library once, right before finals, to check out a book that the professor said we had to read. The librarian went back to get it for me, but returned a few minutes later to tell me that the book was not there. It had disappeared, somehow.

It was unpleasant, at first, because of my attitude, but the librarian changed my mind, and fundamentally changed my heart. To this day I do not know if the book was stolen or misplaced, but I have learned the message that that librarian taught me: assume the other person is as good as you are. That's how you lift up your spirits, and the spirits of everyone around you.

If the book was stolen, I'd continue to be very upset, very distracted. And for what? I could not do anything about that. And I did not know that it had been stolen. I only knew it wasn't there. The librarian's perspective helped me to regain a peaceful state of mind, and that made me the biggest beneficiary of all.

5. Establish an over-arching theme to your life early on. Then spend your life executing on that theme. Over and over again.

I have had many experiences in my life - here, at Penn State, at Cal Tech, and elsewhere. But the theme that has remained the same across everything is my desire to use my influence to make a positive impact on the communities where I am active: my chosen research field (propulsion), my profession (higher education), and the global community -- as a member of many professional organizations like AIAA. My goal, in all of these things, is to pursue public service more than my personal reputation. This is why I've chosen to work for public 'land grant' universities. We reach out to people from all backgrounds. It is why I have worked so hard as an editor of scholarly publications - to uplift the scholarly community. It is why I have worked hard to mentor scholars within the AE School. They will be the pillars of our profession in the future. The call to service gives me many opportunities to execute on my plan. The only question is: where do I put an emphasis at any given point?

When we travel to Mars, history will not label it as being an American or Chinese or Russian accomplishment. They will think it's a step for humankind. Everyone. In the next chapter of my career, I will continue to look for ways to serve my profession. 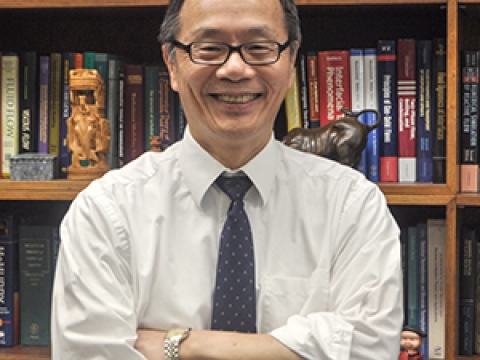