Brian Gunter has a special reason for celebrating the May 22 launch of the Gravity Recovery And Climate Experience Follow-on (GRACE-FO) satellites: the AE professor began working on the original GRACE mission while a graduate student at the University of Texas, Austin more than 20 years ago.

Gunter watched from his Atlanta home as the Falcon 9 rocket (and its GRACE-FO payload) launched from California’s Vandenberg Air Force Base, but his mind was already in orbit. The success of the GRACE-FO launch bodes well for his current cubesat research which includes two scheduled launches in the next 18 months.

The first of those satellites, the Ranging And Nanosatellite Guidance Experiment (RANGE) is scheduled for later this fall, and will also launch on a Falcon-9. The other one, the Tethering And Ranging mission of the Georgia Institute of Technology (TARGIT) will launch sometime in late 2019.

“Another successful Falcon 9 launch is great for Georgia Tech,” he said.  The more success it gets the more likely we won’t have any delay with RANGE.”

It also brought Gunter back to his grad school days, when he worked alongside the GRACE mission PI and Ph.D. advisor, Byron Tapley, and others at UT-Austin to both prepare for the mission before launch and to explore the mission’s data after its successful launch in 2002.

“When the original GRACE mission launched, it was the first of its kind to measure Earth’s gravity at a global scale. And since then it has been able to tell us information like no other project has, such as changes in the ice sheets of Greenland and Antarctica, the flux of water through large aquifers, and insights into the geology behind major earthquakes” Gunter explained.

The GRACE missions do this by precisely tracking the motion of two identical satellites that fly in a leader-follower formation.  As the satellites fly over the same area each month, changes in gravity due to mass loss/gain results in slight (micron level) changes in the relative distance between the two satellites, which the satellites measure using advanced ranging systems.

The GRACE mission officially ceased operations in 2017; however NASA and the German Research Center for Geosciences (GFZ) continue its work with the new GRACE-FO mission.

“The importance of the GRACE-FO mission is that this time series of critical information about Earth’s time-varying gravity will now continue for many years to come.   Many of the processes that GRACE and GRACE-FO observe have cycles that can span years or decades, so we will soon have enough data to observes these long-term signals.”

Gunter is still examining data generated from GRACE, and has incorporated the mission’s findings into his undergraduate and graduate-level courses at the AE School. He anticipates doing the same when GRACE-FO’s data becomes available.  The May 22 launch means that day is coming soon.

View the video produced by NASA to learn more about the GRACE mission. Closed captioning available. 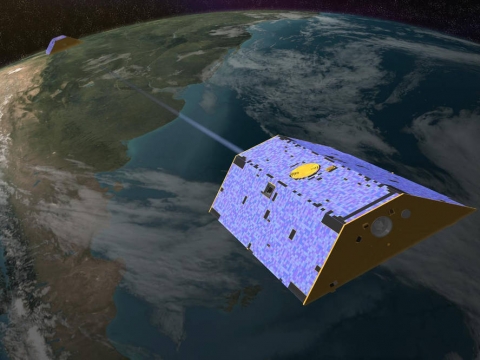