Prof. Claudio Di Leo's Multiphysics Mechanics of Materials Lab (M3Lab) has turned the intersection of mechanics and chemistry into a very busy interchange. And he doesn't see it dying down anytime soon.

"We received an NSF grant to develop next generation nano-architected battery electrodes, which is big, because we need batteries that are safe but also have high energy density. They are going to play a significant role in fields like urban air mobility - the use of battery-powered vertical lift vehicles to transport people around and between cities." he said.

"But at the heart of our work is the coupling between chemistry and mechanics -- something that occurs in many engineering systems, not just batteries. The problems we tackle at the microstructure level make it a lot more complex. And a lot more interesting."

They started by building battery models that replaced the traditional graphite electrodes with electrodes made from amorphous silicon -- a material that can store 10 times more lithium. That, by itself, greatly boosted the electro-chemical performance of the batteries; the silicon-based anodes have a much higher energy density

"The problem then, is that the silicon particles incur very large deformations during lithiation - the bombardment of lithium ions that is the normal process of electricity generation in these batteries,” Di Leo explained. "There simply isn't the space to accommodate that sort of deformation."

"Instead of random particles distributed and maybe bumping into each other, we design electrodes whose active particles are architected to form a lattice -- tiny crossbeams, arches, domes, and spirals,” Di Leo explains.

“When stimulated, these materials can exploit elastic instabilities of their geometry. They can buckle, bend, and collapse such that the electrode will not fail. When it wants to expand, it buckles inward into free space. From the outside, it retains a solid shape."

Findings from this work were summarized in "Electrochemically Reconfigurable Architected Materials"  an article that appeared in the Journal Nature last year. Authored by Di Leo and his collaborators from CalTech and the Eidgenössische Technische Hochschule (ETH) in Zurich, the paper explored the design and physical realization of nano-architected materials. Using models built by the M3Lab, the paper demonstrated ways in which silicon-coated nanolattices buckled in a predictable fashion when lithiated.

Their conclusion – “that a variety of reconfigurational degrees of freedom can be achieved through architecture of the active lattice” – opened up a very rich line of research for the M3 lab.

Beyond Batteries: Tuning a Material's Properties Through Electrochemistry

Energy storage was only the beginning. Di Leo is now constructing models and design tools that will allow his team to demonstrate ways in which electrochemically reconfigurable lattices can improve mechanical performance as well.

Their focus started with research on wave propagation. In a perfectly formed lattice, an external stimulus such as mechanical vibration, might travel throughout the material. Or not. Differently architected lattices can prevent waves of a certain frequency from passing through various zones. Di Leo points out that these 'wave band gaps' create unique opportunities for design. The M3 lab is particularly interested in the wave gaps that form in the nano-architected amorphous silicon electrodes when they are lithiated.

"We don't have this yet, but we are envisioning a nanoarchitected material that has tunable wave gaps. This means you could tune it so that the waves no longer pass through certain sections. You might want to do this to stop the degradation of a material or to stop the degradation of a material that is behind it. An important aspect of our work is then understanding how different designs influence the manner in which the nano-architected lattices deform due to electrochemical stimuli."

When Di Leo looks at lithium batteries he sees a mix of physical and electro-chemical systems that are in constant flux. His goal is to optimize those systems to improve both safety and performance - an age-old challenge.

On the one hand, liquid electrolytes serve as good conduits for ion transport, but their high volatility renders them less safe. Replacing the liquid with a solid state electrolyte improves battery safety, but the routine transport of ions between electrodes causes loads to build up and physically deform the electrodes -- a process that eventually leads to their fracture and failure.

"The liquid electrolyte used to redistribute itself to accommodate these increased loads. With solid-state electrolytes, it's a stiffer environment. You give up the volatility of the liquid, but you run into problems with electrochemical performance, which is essentially: how much capacity does your battery have before it cracks? This is a strength of the M3 lab. We are not just mechanicians, we are interested in how mechanics impact the electro-chemical performance of a system. And vice versa."

Di Leo has recently begun working on various aspects of modeling chemo-mechanical behavior in all-solid-state batteries. Ultimately, the objective is to develop a complete model for next generation solid state energy storage devices which captures the intersection of mechanics and chemistry and enables future technologies.

Another grant from the US Air Force Academy's Center For Aircraft Structural Life Extension (CAStLE) is allowing Di Leo and Prof. Josh Kacher from Georgia Tech's School of Materials Science Engineering to probe the chemical and mechanical properties at play in the hydrogen embrittlement of aluminum alloys. Embrittlement occurs when diffused hydrogen collects along the crystal grain boundaries of the alloy. Eventually, this weakens those boundaries, causing it to crack or fracture under stress.

Their proposal, "Experimentally Validated Numerical Frameworks for Understanding and Predicting Microstructural Effects on Environmental Induced Cracking of Aluminum Magnesium Alloys" outlines a four-year study that should produce some very practical analysis tools for countless microstructures that could be produced in the future.

“We don’t know exactly what’s going on with environmental induced cracking -- why it's degrading -- but we do know it degrades the mechanical properties, causing the material to fail. And this is important, because when we send a ship out into the ocean, and these little corrosion pits form in the metal, those corrosion pits are susceptible to hydrogen embrittlement. We know it's a potential point of failure."

Forestalling that failure through the manufacture of more resistant microstructures is the goal of the collaboration: Kacher is performing the experiments and Di Leo is simulating those same experiments to develop an experimentally-validated theory that can vary the inputs and predict the results.

"If we can tell a metallurgist what microstructural properties are optimal, then they can change their casting process to create that crystal," Di Leo explains.

Thus Kacher and Di Leo will begin to identify what properties are working in different alloys. When they run a computer-generated mesh microstructure through Di Leo's numerical framework, they can compare the results to Catcher's experiment's to validate the framework.

"Ultimately, they all fail, but when we have more data, we'll be able to leverage it to create less susceptible alloys and forestall that failure." 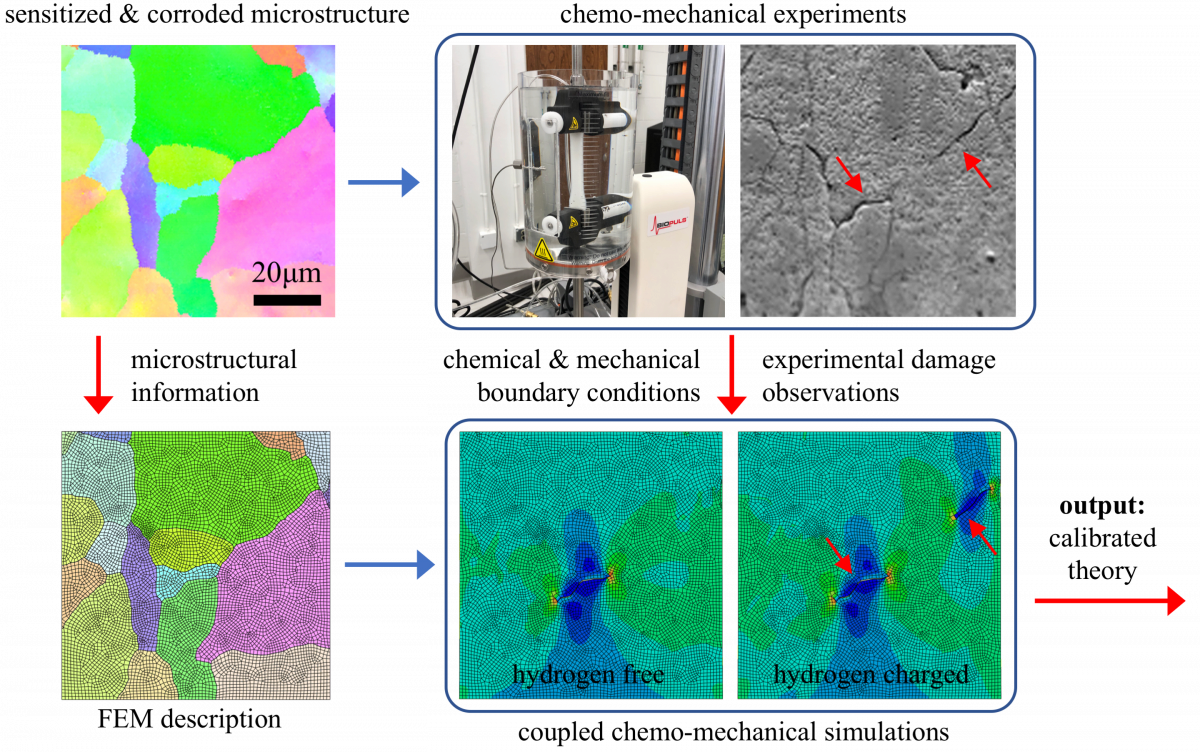 Proposed combined experimental and theoretical study of environmental induced corrosion. Expereimentally exact microstructures are being modeled using a chemo-mechanical framework to capture the manner in which hydrogen distributes in these microstructures and leads to damage.