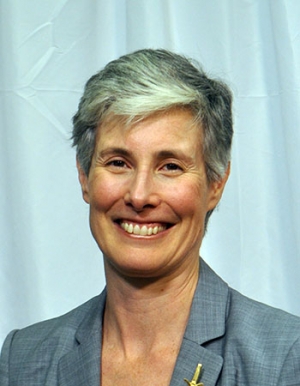 Professor Amy R. Pritchett served at the School of Aerospace Engineering as the David S. Lewis Associate Professor of Cognitive Engineering, holding a joint appointment in the School of Industrial and Systems Engineering. In 2017, she was named the chair of the aerospace engineering department at Penn State. Dr. Pritchett received an SB, SM and ScD in aeronautics and astronautics from MIT in 1992, 1994 and 1997, respectively. Dr. Pritchett has led numerous research projects sponsored by industry, NASA and the FAA. She has also served via IPA as Director of NASA's Aviation Safety Program, responsible for planning and execution of the program ($75-82M / year), conducted at 4 NASA research centers and sponsoring roughly 200 research agreements, and serving on several executive committees, including the OSTP Aeronautic Science and Technology Sub-committee, and the executive committees of CAST and ASIAS. She has published over 170 scholarly publications in conference proceedings and in scholarly journals such as Human Factors, Journal of Aircraft and Air Traffic Control Quarterly. She has also won the RTCA William H. Jackson Award and, as part of CAST, the Collier Trophy, and the AIAA has named a scholarship for her. Professor Pritchett is the Editor in Chief of the Journal of Cognitive Engineering and Decision Making. She is a member of the FAA REDAC and chairs the Human Factors REDAC sub-committee. She is also a licensed pilot of airplanes and sailplanes.