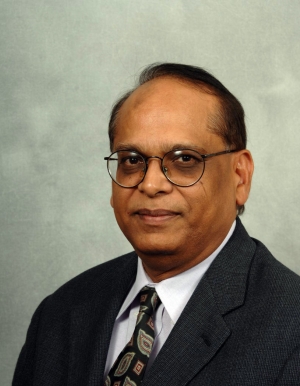 Dr. J.V.R. Prasad is a professor in the Daniel Guggenheim School of Aerospace Engineering at the Georgia Institute of Technology working in the area of flight mechanics and control. He received his B.Tech degree from the Indian Institute of Technology, Madras, India and his M.S and Ph.D. degrees from the Georgia Institute of Technology, Atlanta, USA. He is currently a co-principal investigator and the associate director for the US Army, Navy and NASA sponsored Vertical Lift Rotorcraft Center of Excellence (VLRCOE) program at Georgia Tech. He has extensive research and design experience in rotorcraft system modeling and control, propulsion system modeling and control, and autonomous air vehicle modeling and control. He published parts of four books, sixty refereed journal papers, more than 250 conference papers and 80 research project reports. He has 18 invention disclosures and five patents to his credit. He is a recipient of the 2009 Melville Medal award from the American Society of Mechanical Engineers (ASME) and the 2015 Aero Lion Technologies Outstanding Journal Paper award from the International Journal of Unmanned Systems. He served as the editor-in-chief of the Journal of the American Helicopter Society (AHS), chair of the Handling Qualities and UAV Tech Committees of the AHS, and as member and secretary of the Atmospheric. Flight Mechanics Technical Committee of the American Institute of Aeronautics and Astronautics (AIAA). He currently serves as a member of the editorial board for the International Journal on Mathematical Modeling and Simulation and the advisory board for the International Journal of Unmanned Systems. He is a Fellow of the AIAA, a Technical Fellow of the AHS and a member of the ASME.