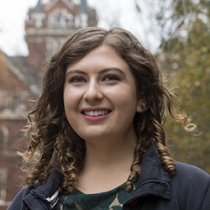 Immediately after I graduate I will go to Iceland with my sister for a little vacation. I'm a huge fan of plasma (my job at NASA has been as a plasma propulsion engineer) so I want to see the Northern Lights - a big plume of plasma, really. And it will be dark for so long - the perfect backdrop. Then, I'll return to do my fourth rotation at NASA Glenn until the fall, when I plan to go to graduate school.

I want to be a grad student -- to have my own engine and my own projects. It sounds like a small thing, but once I receive a fellowship and can use resources and run things. I'll continue at NASA, where I can continue to play with big engines

I've done six rotations at NASA - two at NASA Johnson, three at NASA Glenn, and one at NASA Marshall. Each center has a different focus. I'm about to do another one at Glenn which focuses on research. I love research. But, fundamentally, I like NASA's goal, which is to make discoveries, not profit. I've gotten offers from private industry, and I've tried to consider them, to be well-rounded, but I genuinely appreciate NASA.

Research has been my passion, but if you look at what I've done, you might think it's been kind of scattered. Actually, each research project got me closer to to what I do and do not like, and I learned so much from the people who mentored me.

I started freshman year doing research in artificial intelligence with a cognitive psychology and neuroscience professor. It was fascinating, but it was all computers and machine learning and I wanted to have a more hands-on experience...so the best day of my freshman year was when Dr. Saleh approached me after my Intro AE class and asked me if I wanted to do research on cratering records for solar systems bodies. We looked at more fundamental planetary problems and I learned a lot. My sophomore year I had my first foray into fixed wing vehicles when I worked with Dr. Elena Garcia in the ASDL. I had always been surrounded by space people before, and that's where I was eventually headed, but this research introduced me to electric propulsion. This past semester, I asked Dr. Walker if I could work with him, and he set me up with a grad student to discuss what I wanted to do. Afterwards, he set me up with a project that, during my first week, made me pull an all-nighter because we'd found an anomaly in the thruster. That's part of what you have to expect with experimental. It's unpredictable. It's not like analysis, where you can put the equation to bed for the night and it will be the same in the morning. With engines, you have to make sure you are there to make sure the throttling levels and temperatures and pressure levels are right. The great thing is, I've grown into this type of research. I feel like I"ve been there longer than I have,

How did your educational experience at GT-AE help you achieve that goal?

A big part of what helped me was my confidence in the faculty. Throughout my time at Tech, there's always been a door open to me.  Dr. Saleh has been an amazing role model - I still go to him for advice.

Another thing that's helped me is a new organization - Women of Aerospace Engineering - that is establishing a consistent community to support women in the department. They are smart, and they are good to turn to for support.

Go places that make yourself uncomfortable. Fake it til you make it.

So many things I've tried at Tech scared me at first. For instance, Dr. Walker is so well-respected, so intelligent, and so involved in this discipline, I had to give myself a pep talk before I could ask him about research.

Don't wait. You are never 100 percent ready for anything you try. You still need to try it. For me, it often resulted in my being the youngest or least-prepared person in the room. But, then, the challenge was to get up to speed. And you can do that.

I don't know who said it, but I'll repeat it: if you are the smartest person in the room, you are in the wrong room.