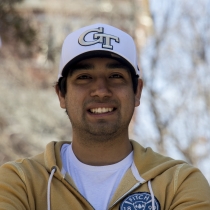 Starting in March, I will go back to NASA Houston for my first rotation as a grad co-op. I'll be working on flight operation & trajectory planning, focusing on entry, decent, and landing (EDL). In August, I will begin graduate school. It looks like I will be at San Diego State University.

I am super excited about working with NASA as a grad student. I will have a chance to be a part of something bigger, once-in-a-lifetime: developing algorithms that will be on spacecraft like Orion, telling them the right attitude so they can attain optimal conditions for descent. NASA is not just about space, it's about teaching, exploring, and showing the amazing things that are out there.

It will also be nice to be back home, in San Diego, near my family. My little brother will be starting college, and I'll be there for him. The only thing he needs to do is make the right decisions, and I think I can help him do that.

And it will give me a chance to step back and enjoy what I am doing. Five years ago, I was crossing the boarder from Mexico to go to school. Now, I'm studying aerospace engineering, working at NASA. I want to step back and see how I can share with others.

I have had two co-op rotations at NASA Johnson. In the fall of 2016 I worked in the Trajectory Operations & Planning Office (TOPO) doing trajectory planning for the ISS. Using data collected from a GPS, I helped plan the best trajectory with Mission Control. During my second rotation - the summer of 2017 - I worked on the structural team, doing loads and structural dynamic planning for testing. From these two co-ops, I realized I Ioved the TOPO but I also wanted to stay with traditional engineering. So I decided that everything I do will be a combo.

In the summer of 2016, I co-opped at JPL as a systems engineer, doing work for the Europa mission.
I also did a business internship at Encore Capital Group - doing data analysis. It was a great experience because it introduced me to a world outside of aerospace engineering at Tech -- a place where people did very different things and were very serious and very dedicated. I'm glad I did it.

One semester I had three research projects going on, I was taking five classes, I was president of the Hispanic recruitment team, and I was an OMED mentor... I say this because I have often found that the busier I am, the more motivated I am.

How did your educational experience at GT-AE help you achieve that goal?

Georgia Tech pushed me to my limit.

I always knew I could learn but I didn't know how much effort it would take to be the best. Whether it's class or networking or researching - they want you to be the best. It's tough sometimes, but the school only does it for the best students, because they know Tech students can be leaders - in grad school, in industry, in life.

I think the best advice is to take advantage of every opportunity. If you knock on every door, maybe one will open for you. What they don't tell you is: maybe two doors will open.

We only have one life. You never know if an opportunity is going to come along again.

And get to know people - not just the ones who you think can get you a job, but everyone who can teach you an important lesson in your life. You do not know what each person can bring.

At Tech, I never felt like I was from an under-represented group. When I walked into a room, I just did not have that mentality. What I thought was: 'I am smart. I'm going to be the best. I worked hard to get here - maybe harder than anyone else here. No one gets a free ticket to attend Tech. They have to earn it.  I'll work hard and I'll do the best.'

No one else will think this for you.