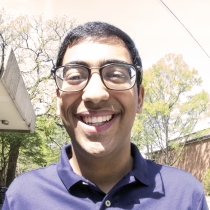 I'll be working for Boeing as a systems engineer in their Satellite Development Center. I don't know what project, yet, but I do know I'll be moving to L.A.

I'm most excited that I'll get to work on satellites. That's why I got my master's degree. After I received my undergrad, I'd been offered a job doing CAD and structures. I have nothing against that, but I want to actively work on something that goes to space. The fact that I got to do systems engineering at Tech meant that I got to touch a lot of areas, so I was ready for this. I'm so excited about it that it doesn't even feel like a job.

As an undergraduate I did two internships, at Gulfstream in Savannah and the Harris Corp in Melbourne, Florida. At Gulfstream I did finite element modeling and structural analysis. At Harris, I did CAD work and model designs for space reflectors and antennae. Research-wise, I was involved with the Prox-1 cubesat for more than four years. I started out working on CAD, making sure all of the components fit together. My senior year, I was elevated to structures lead, and there were seven or eight people under me. That taught me a lot about team management, identifying and using other people's strengths and weaknesses, and, most of all, accepting that I couldn't do it all myself. In graduate school, I was asked [by Prof. Dave Spencer, the P-I] to stay on the project as the chief systems engineer.

As a grad student, I had two internships, both at JPL. They involved a little bit of CAD, and a lot of systems engineering. One was a concept study of the Next Mars Orbiter or NEMO where we did a lot of trade-off studies to determine what configurations would work best. Because I wrote a lot of code for this one, someone asked me to join another team that was designing a  low-cost Mars Rover -- we called it Fetch Rover. Essentially, then, I was working on two projects, and the work was hard. There were weekly evaluation meetings with higher-up administrators. But I felt like I was working on something that was relevant and I wouldn't have dropped either one. It was a great experience.

How did your educational experience at Georgia Tech help you to achieve your goal?

When I first got to Georgia Tech, I didn't know if I wanted to study aircraft or spacecraft. That was part of my exploration, as an undergraduate, and it landed me a job on a satellite (Prox -1] that opened up opportunities I didn't even imagine. Suddenly, I was working on a satellite that, in a couple of years, could end up in space. A couple years after that, I was helping others to work on the same project, as the chief systems engineer. It's just something I'd never have imagined. But when I went on interviews, employers saw it. They wanted to take advantage of my experience because they knew they wouldn't have to bring me up to speed. I could continue along the path I'd already started at Tech.

I'd have two pieces of advice. First, as an undergraduate, learn the fundamentals and get involved in research if you can. Drop any assumptions you might have about what you will do. Your undergraduate degree is only a license to learn so learn as much as you can. Industry is where you'll take off the training wheels and pay your dues.

As a graduate student: graduate school begins to set you apart, but in no way are you an expert. Remember that you are here because you wanted to be here and take full advantage of everything you can find in the research and the classes.